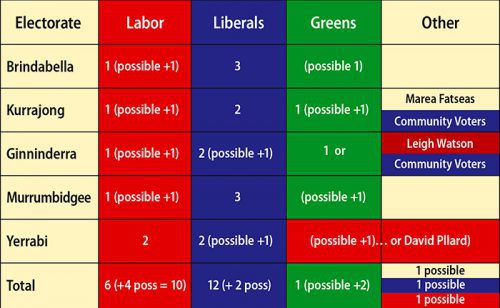 LABOR are in strife for the ACT election; the tram, the deals, indebtedness to the unions and the millstone of such a long term in government play against them.

Assuming the Greens will support Labor for government, the final determination is likely to be in the hands of independent Marea Fatseas or the Canberra Community Voters Party.

Predicting the outcome of a Hare-Clark election is fraught with pitfalls. Many Canberra voters mark their preferences across parties. There are now five electorates with an additional eight members. Moreover, last election delivered a Labor government with the support of the Greens despite the Liberals having a whisker more primary votes with 86,032 to Labor’s 85,991.

Three major factors influence the outcome of an election under Hare-Clark. First is the profile of individual members; second, the positioning and policies of the candidates and third, the behaviour or standing of individuals or parties. On all three of these factors Labor is struggling. The Liberals and Greens also have their challenges.

The alternative are the independents and small parties. Building a profile, establishing policies and recognition are a tall order for most. In the electorate of Kurrajong, the former Yarralumla Residents’ Association president and Southside Community Council member, Marea Fatseas, has managed all three. The same is true in Ginninderra of former CEO of ACT Shelter, Leigh Watson. Both of these independents are credible and deserve a chance.

The small parties are variable. Richard Farmer’s Canberra Community Voters has some profile in supporting ACT clubs in their battle against poker machines for the casino and integrity in government. Similarly, the Sustainable Australia Party and Robbie Swan in Murrumbidgee and Steven Bailey in Brindabella for the Australian Sex Party need to build a broader profile.

The Greens have the profile and the standing amongst their own constituency. Although outsiders and some purists might be critical of Shane Rattenbury for accepting a ministry, Green voters will generally see this option as better than voting Labor.

Voters are looking for a change. Supporting sensible independents and minor parties just might provide a cross-bench that restores integrity and keeps government accountable.

Moore’s call of the electorates