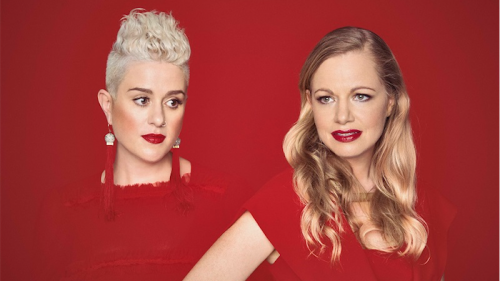 THERE’S almost a strange feeling of guilt when you listen to Latin American music – as though you’ve somehow been unfaithful to someone. Its sensuous mystery lures the listener into a far-off place of desire and longing.

Although they did not include “The Girl (or Boy) from Ipanema”, Katie Noonan and Karin Schaupp certainly swayed so gently that when each song passed everyone in the audience went “ah”.

There were some favourites in the list, though, including Antonio Carlos Jobim’s seductive “Wave” and his perfectly in-tune “Desafinado” (“Slightly Out of Tune”). The latter featured some understated but very effective backing by William’s Guitar Ensemble, made up of students from Canberra Girls Grammar.

But there were some lesser-known songs, too. One of them was “Tikata tarpuinikuchua”, a song arranged by Argentine composer Gerardo Dirié and based on an eight-bar fragment from an ancient Incan opera.

The next song was another, this time “Sentimental Melody” from “Forest of the Amazon”, a modern opera by Brazilian composer, Heitor Villa-Lobos. These were contrasting songs, but both taking the listener deep into the Amazon jungles, Noonan’s voice soaring effortlessly through the incredible range demanded in both songs, her pure tone reaching every note perfectly.

A few pieces for solo guitar gave Karin Schaupp the chance to show off her extraordinary talent as a classical guitarist. A highlight was “La Muerte del Angel” (“Death of the Angel”), a tango by the patriarchal composer of that form, the Argentine, Astor Piazzolla. Despite its rather unfortunate title (and tale behind the title), Schaupp metaphorically had the red rose firmly clenched and literally had audience toes gently tapping along.

I didn’t want the concert to end, for I was happy to continue on my guilt trip. Schaupp and Noonan are perfectly teamed and, in each song, put themselves into its own world, but always bringing the audience along, wrapping it all up in a concert of luscious music.