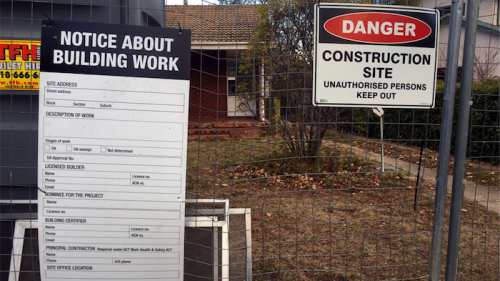 The strategy looks like any other government document with the usual graphics and photos. A positive is that it contains useful data on population and all such stuff.

There are hints about some questionable development priorities and mention of lots we wish they were actually doing rather than constantly talking about. There is nothing exciting here.

An amusing heading is “What we heard”. They do not report what was actually “said” by residents. How residents’ words are translated to fit their own agendas remains a thing of wonder.

On November 28 the Weston Creek Community Council had a presentation on bushfires. A big message was that bushfires would now be more dangerous due to a range of factors including climate changes with Canberra’s western edge remaining very susceptible.

Despite this, the strategy states that several areas to the west remain open for developments. What comes to attention is what Chapman and Rivett residents have been saying about building social housing on the western edge – let alone the taking over community spaces for social housing.

Checking for key words, “climate” gets a fair mention at last but the value of “arts” and the importance of “architecture” and “landscape architecture” have been ignored.

The many who participate in the arts and those wanting more arts centres will not be surprised that the arts are not a priority for this Labor/Greens coalition. Do we have an arts minister?

The strategy signals that there will be more lovely towers on our horizons. Between the lines and in the media spin, the message is that it will be business as usual for developers. They will be very happy.

This document will not convince residents that this government is doing something real about questionable building standards. We can only dream of interesting architecture. Aesthetics are important but not to the authors of this strategy.

And by the way – hands up those who can remember agreeing that Canberra needs loads more high-rise towers.

There are a lot of words in the strategy about the government keeping the bush capital that we all love. Unfortunately, the experience is that the opposite is true. In established suburbs such as Campbell the biodiversity and tree cover is being reduced due to inappropriate zoning while new suburbs in Molonglo dream of having the trees and shrubbery of the established suburbs.

All over Canberra there are problems with increasing traffic and with roads that do not cope with the infill underway. Each new tower brings more street parking and extra traffic. There’s little in this strategy that deals with these issues even though community groups identify this as a priority. Infrastructure may be talked about – but not a lot happens.

During 2017-2018 residents volunteered days and weeks dealing with the many “community engagement” exercises thinking things may get better soon. It has not.

Unfortunately for the hard-working community associations who experience the depressing realities of how this government deals with residents on planning matters, there is little to celebrate in this strategy as handed down from the mountain by Mr Gentleman.

What people are looking for is for all the bad stuff to stop now – not to be something that may happen in the future after even more community engagements.

Residents continue to look for solutions from this government despite the obvious that these are the agencies doing the continuous damage to our city. Should people look elsewhere and think differently about solutions to these never-ending problems?

Planning and development are things that matter. But people need to stop doing battle individually.

Residents are talking about bringing energies together to identify a different, positive and a collective way of dealing with the mess caused by this Labor/Greens coalition and its planning bureaucrats. Residents need a different strategy.

CityNews - April 13, 2021
0
Air quality in Canberra may be impacted this week with prescribed burns taking place in NSW and the ACT, warn ACT Health.