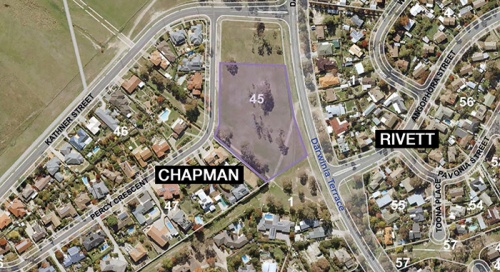 SOMETIMES when reading resident-group newsletters, you have to re-read what you have read to make sure it says what you think it said (surely, the ACT government wouldn’t do that?).

There were several such statements in a Darwinia Park Action Group email about the government’s moves to plonk government housing on community open space in Chapman.

Here’s one of them: “So, the body responsible for planning, lease administration, land information, development and building regulation, which one would expect to be done at arm’s length and independently, is now a leasee and has approved a DA proposed by itself.”

Another point was that the government used a lesser-known rule under the Districts Act of 2002 (know that one?) to avoid ACAT (Appeals Tribunal) questioning their action as ACAT covers decisions under the Planning and Development Act 2007 (the one too complicated for sane people to understand).

We are witnessing the ACT government using trickery and obscure rules to take over community land in Chapman. Why? Because they completely bungled social housing and are not prepared to use their land banks as these are reserved for developers. Instead they have devised belligerent and duplicitous methods to deny generations of residents access to precious green spaces.

Such games are also in play to build social housing units on other community sites in Holder, Wright and on the Dickson Parklands site (this while the infamous Dickson land swaps remain under investigation).

The Darwinia Park Action Group must wonder how it ended up dealing with what must seem like a foreign power that is at war with it and is hacking into residents’ lifestyle. Isn’t this an elected government with a charter to work with their electorate? Instead they constantly use tricks and spin against those that elected them, the residents.

Chapman and Rivett residents must ask why this Labor/Greens coalition government forces residents to choose between social housing and the need for community facilities and green spaces. Surely, community-focused politicians could see the simple answer: that we could and should have both. It does not have to be one or the other.

There must be residents out there who thought that in 2016 they had elected a Labor/Greens coalition government that would have social justice, community and environmental values as key issues not to be traded away. It seems that those voters were mistaken. The Greens are part of this government and therefore decisions made by the government in the planning and development arena are owned by the Greens as well as by their Labor partners.

The proposals in Weston and Dickson are being ushered through using a pretence of consultations while the Greens watch from within. It seems that while bold stances are being made in national forums over energy and other important issues (big tick), in their own backyard questionable decisions are made almost daily by the government they are part of (thumbs down).

Somewhere along the way our local politicians conveniently overlooked that they have local council responsibilities as well as more lofty state government functions. When the going gets tough many of these local politicians perform as just more out-of-touch careerists. But wait, you can guarantee they will become your friends again come election time in 2020. Sadly, by then your suburb will no longer be the one you cherished.

These disrespectful actions in Chapman and elsewhere by the Labor/Greens coalition government cause a lot of disruptions and unnecessary trauma to residents.

Optimistically residents keep hoping that someone in this coalition government still has humane values and will put a stop to these underhand methods. If not it looks as though we will be going into the next election with our precious green community spaces drastically diminished. That reality and what matters to Canberra residents will inform many on how to vote.

Paul Costigan is an independent commentator and consultant on the visual arts, photography, urban design, environmental issues and everyday life matters. He has written on public housing before at the-southern-cross.com/people