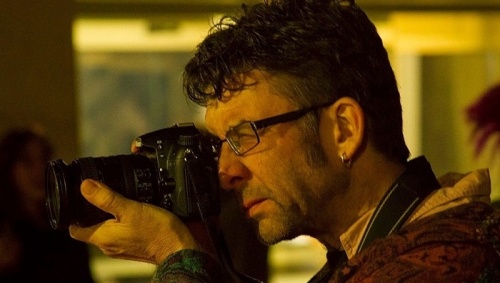 THE Canberra arts community is mourning the death of performance photographer Kevin William Prideaux (‘pling) who died in Wollongong in late November. He was 63.

A celebration will be held tomorrow (December 14) at Ainslie Arts Centre to commemorate his life and work.

‘pling and his long-time partner and collaborator, poet and author Kathleen Bleakley, had moved to Wollongong in 2014, but his many years as the silent chronicler of Canberra’s arts scene are not forgotten.

“CityNews” frequently benefited from ‘pling’s output and there were often midnight email exchanges where this writer asked: “Did you get any good pictures tonight?” Which always resulted in a fabulous photo or two by morning.

A photographer with a special gift for capturing theatre, music and dance in action, ‘pling held many exhibitions in the ACT, including three during the 2013 Centenary of Canberra festivities—“Canberra At Street Level”, “Head Full of Flames: Punk in the Nation’s Capital ’77-’90” and “Massive Love of Risk: the Art of Splinter’s Theatre of Spectacle”.

Quiet and modest though he was by nature, nothing was ordinary about ‘pling.

‘pling was born just a few days after his father, William Kevin Prideaux, was killed by lightning while playing cricket. He was raised in Victoria by his mother Hilda and stepfather Roy with four siblings.

Always the skinny kid as a schoolboy, while studying Forestry at ANU, a classmate proclaimed: “You’re not a forester, you’re just a sapling!” Shortened to ‘pling, the named stuck.

After a brief career in forestry then City Parks, he moved into database management to work for the ACT government — a quiet public servant by day for around 40 years and a cutting-edge photographer by night.

‘pling began photographing punk performances in the 1980s, but by the ’90s was following the sensational outdoor shows by Splinters Theatre of Spectacle and indeed most of Canberra’s experimental artists, to whom he gave his photographs freely and generously, making him one of the most-loved personalities in Canberra’s arts world.

He worked closely over the year with theatre artists like the late David Branson, Cheneoh Miller, Janine Ayres, Padma Menon and Joe Woodward.

After moving to Wollongong in 2014 he enjoyed a period of purely artistic endeavours, collaborating with Bleakley on books and exhibiting in the Illawarra and south coast region, while keeping up his Canberra contacts.

In early March this year ‘pling was diagnosed with aggressive Non-Hodgkin Lymphoma. His son and partner moved to be with him during his illness and he died with family and loved ones by his side on November 27. A private burial was held in Wollongong.

‘pling’s son with designer-artist Fiona Edge, Fabian Prideaux, has paid tribute to him as a “gentle man… an amazing dad and role-model” but one who was also “a very silly man and a big dag… Anyone who met him will remember his unique shirt collection and odd socks that was so unmistakably ’pling.”

A celebration of ‘pling’s life and work will be held at Ainslie Arts Centre. Elouera St Braddon, from 5.30pm-11pm tomorrow, Friday, December 14. All welcome. A gofundme campaign to raise money to digitally archive ‘pling’s collection of prints spanning over 30 years of Canberra arts and music is at gofundme.com