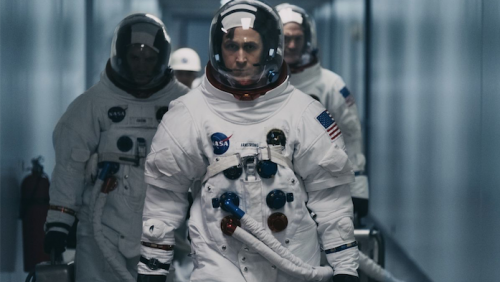 DAMIEN Chazelle’s second film as director (after “La La Land”) begins with the 1947 flight on which Chuck Yeager flew the experimental Bell X-1 at Mach 1.

Fast forward to 1962 when the US felt it needed to surpass the space achievements of the USSR and Neil and Janet Armstrong (Claire Foy) buried their two-year-old daughter Karen, an event that Chazelle’s screenplay revisits briefly on several occasions in the next eight years leading to and during Armstrong’s moon walk on July 20, 1969.

‘‘First Man” tells the story of US space activity alongside the domestic lives of several astronauts, most particularly neighbour Pat White whose husband Ed (Jason Clarke) wasn’t on Apollo 11 when it landed on the moon, but was a close associate of Armstrong.

The film works hard to tell about the highs and lows of political and technical events on the ground and in the air leading to Apollo 11. Some of the last of those are likely to be of great interest to space exploration aficionados.

Ryan Gosling makes a light meal of playing Armstrong including passages involving testing of some of the modules built for the flight and the landing. Apparently Armstrong was unfazed by one machine that rotated him on three axes at increasing speeds. We must assume that Gosling’s middle ears withstood the test, but you might be forgiven for wondering whether you were watching a stand-in or a dummy.

“First Man” is workmanlike cinema, Hollywood soberly and affectionately recreating events that the media wallowed in at the time and others that were not made public. Some might consider it fiction playing as documentary. Or vice versa. It’s both.