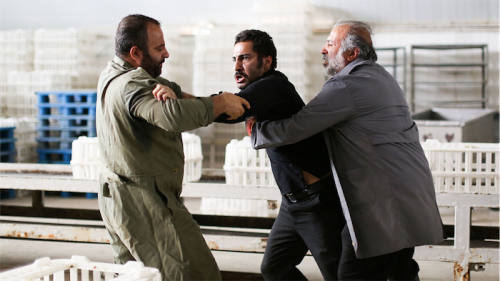 In 1985, post-revolution Iranian films burst on to Australian screens with “The Runner”. In later years at the Sydney Film Festival and occasionally commercially, more of them appeared – for example, “The Olive Grove” and “The White Balloon”. They weren’t just beautiful. They said much and it was worth hearing.

Fast forward to last year and this intense drama about truth, professional skills and ethics. Driving home, forensic pathologist Kaveh (Amir Aghaee) has a collision involving a father and his eight-year-old son. The father refuses an offer to drive the boy to hospital. Next day as the pathology team is allocating last night’s mortalities, Kaveh sees that the boy is among them.

Kaveh’s colleague Leila (Zakieh Behbahani) does the PM on the boy and reports that the cause of death is botulism. But might she have missed an internal injury? The stage is set for a look at how they do things such as medicine, food sanitation and law enforcement in Iran.

Very much like they do it in Western countries. The film’s exploration of internal politics at the hospital, the abattoir and a judicial enquiry is gently didactic, probably more for domestic consumption than export, observing Iranian public and family society with respect. It acknowledges religion without proselytising, although burial practices are rather different from ours.

I selected “No Date, No Signature” for review because I’ve been starved for Iranian cinema in recent years. Sitting alone in the cinema as I do for so many new films that don’t clamour mainstream virtues, I found it rewarding. Shot in colour, its appearance might easily be mistaken for monochrome. But it’s not.