An intimate audience gathered in the Larry Sitsky recital room, mainly fellow musicians, classical music aficionados, academics and lovers of the avant-garde, a pretty tough crowd. From the moment Lifschitz and Moore graced the floor, both in abstract printed silk and carrying electronic scores, it was clear something extraordinary was about to happen.

The opening “Hallelujah Junction” (1996) by John Adams, was an eruption – absolutely assured, uncompromising and metronomically precise. Named for a truck stop in the US, this work evokes the America of Allen Ginsberg and Harry Partch. The opening perhaps nods to Steve Reich’s earlier “Different Trains”, another testimony to travelling life. Lifschitz and Moore rendered this taxing work seemingly without effort. Out of complex combined textures they drew a birdlike lightness, an artistic decision that complemented Adams’ use of 12-tone sonorities without the heavy tritone saturation of European modernists.

The relentless driving rhythms of this work fork out into hemiolas, metric modulations and additions – a complexity of rhythmic language where a single slip could spell disaster. To that rhythmic landscape Lifschitz and Moore brought precision and calm, ringing pedal notes underpinning kaleidoscopic fields. One striking feature of this performance was the way the performers celebrated pianos as pianos, as percussion instruments, and not pseudo-orchestras.

Martin Bresnick’s 2014 “Handwork,” a fantasia in honour of the human hand, ended the first half. After the co-ordinated independence of the Adams work, Bresnick required a much closer sense of ensemble.

From the hymn-like opening bars, Lifschitz and Moore were almost indivisible from each other. Bresnick’s expanded modalities canvassed a 12-tone language that was never austere, never arrogant. Artful use of sostenuto pedal (III) created watercolours of layered overtones, ringing out into the silences like white space in a painting. Reminiscent of Messiaen’s organ music, Bresnick’s work evoked spaces of churches – sotto voce utterances surfaced and disappeared again, like conversations heard from the back of pews. Even beside the forthright Adams piece and the Herculean performance of Bach to follow it was this work that seemed to capture the audience’s imagination most.

Lifschitz and Moore concluded their tour de force with Steven Emmerson’s new arrangement of Bach’s 1741 “Goldberg variations”. Originally titled “Clavierübung consisting of an Aria with Diverse Variations for the Harpsichord with Two Manuals Composed for Music Lovers, to Refresh their Spirits” the work was later known simply as the Goldberg variations. The story (probably untrue) is that Bach wrote these variations for his harpsichord student Johann Gottlieb Goldberg to play to Count Hermann Carl von Keyserlingk as a cure for insomnia. For achieving this the Count awarded Bach a golden goblet filled with a hundred Louis d’ors.

It is always brave to perform a work as well known as the Goldberg variations, famously recorded by hosts of luminaries and several times by Glenn Gould. But Emmerson’s arrangement for two pianos allowed a completely fresh glimpse into Bach’s counterpoint. Lifschitz and Moore rendered every structural detail with crystalline precision, while affording vine-like contrapuntal threads freedom enough to sing. This was a profoundly imaginative and moving performance, forthright in articulation and subtle in its effects-especially the simultaneous use of varying dynamic levels.

The Goldberg variations are 40 minutes long, but this performance ended too soon for the audience, who collectively held their breath until after the last notes had rung out. 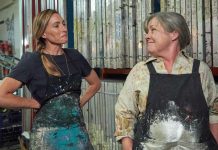