IT was a teetotalling Canberra advocate who proved himself something of an enemy of its people but one of the greatest of friends to Queanbeyan and, in a spectacular fail, its pubs.

The preposterously named King O’Malley, a US-citizen-turned-Canadian who entered Australian politics and, as Federal Minister for Home Affairs in 1911, was responsible for the introduction of one of the most contentious pieces of legislation this still-fledgling country has ever known – the ban on the public sale and consumption of alcohol within the borders of the designated Federal Territory.

For the 17 years it was in effect, so well-worn was the route into NSW, the civic administrator of the Department of the Interior, Charles Daley, “couldn’t keep the road to Queanbeyan in order, because with Prohibition in Canberra, chaps were just heading there every day and all day, every night and all night, and wearing the road out!”

In particular, a place that had been part of the fabric of the wider region almost from the beginning, the Royal Hotel, was so popular patrons would be lined eight-deep at the bar, spilling out the doors into the primary intersection of the town.

Having presided over the corner of Monaro and Crawford Streets since 1850, the Royal, now the second-oldest, continually operating such establishment in these parts (the oldest is the Lake George Hotel, formerly the Harp Inn of Bungendore, 1838) just last month entered the next phase of a journey that’s spanned three separate centuries.

Its owners since 2010, Anthony and Sandy McDonald, following in a tradition of husband-wife teams running the show, have devoted as much time, energy – and funds – to the iconic building that replaced the original after a fire wreaked extensive damage to the upper floor in 1926.

The initial stage of the latest major refurbishment on the ground level occurred in 2012, and “The Upper House”, formerly upstairs accommodation and areas that had remained untouched for years, has now been completely revamped, introducing a tasteful, modern space in harmony with its heritage and history.

According to Anthony: “Its position, its significance to the town and the area, and the fact Queanbeyan is progressing in leaps and bounds, means our vision and investment has and continues to be fully embraced and supported, and we’re very proud of what’s been achieved.”

“And we love a country pub,” adds Sandy. “Its place as a cornerstone of the community spoke for itself.”

First built by Martin Byrne, an ex-convict who turned about his own fortunes in just over a decade, Byrne’s Royal Hotel catered to a barely declared township with a population of around 300 – a time when the pubs outnumbered the churches.

When it appeared, the main thoroughfare, initially “Moneroo Street”, was a dusty road consisting of a handful of buildings, while Crawford Street behind meandered off to nowhere.

There were visits by royalty, prime ministers and celebrities; weddings and births, drama and intrigues, and licensees, who included a later mayor. And what would an historic pub be without its share of ghost stories.

Its rebuild, undertaken by the Richardson family, was so rapid to ensure not a moment more in trade was missed than absolutely necessary. (This would rival a similar occurrence almost 50 years later, when the Leagues Club continued its operations beneath a marquee erected on the opposite side of the main street where it had burned down in 1972).

Queanbeyan’s oldest resident, Mrs Linda Moore, who’ll turn 104 in January, recalls seeing the art-deco style hotel rising up on the spot once more when she was 11-years-old.

“We lived at Burra and when we came into town – first in horse and buggy and then T-Model Ford – we’d stay at what is now the Royal.”

A central part of memories for so many, the Royal has watched on as a town, a colony, a nation and a national capital developed around it, in many ways, mirroring the successes and the hardships of its home.

Always more than just a pub though, it’s long been a community hub, and King O’Malley, despite his best efforts to do otherwise, deserves a toast of thanks for his contribution to ensuring its place and ongoing significance!

Nichole Overall, author and social historian, and her son Nick have produced a short documentary on the history of the Royal Hotel and its place within the community at youtube.com/watch?v=m5hTuucrbkI&t=303s 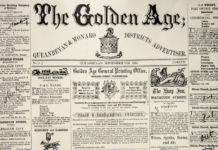 Goodbye to ‘The Golden Age’ of local newspapers 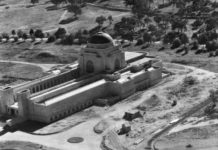