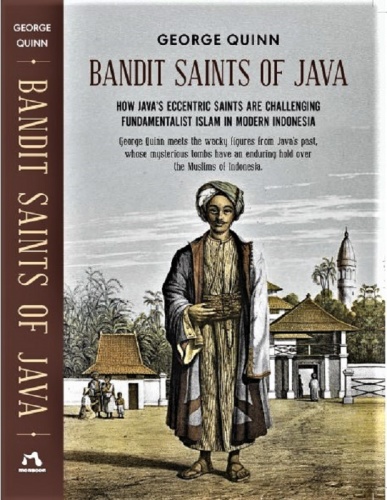 IN his heyday, teaching at the ANU, Indonesia scholar George Quinn had the reputation of being able to produce students who were more or less fluent in Indonesia’s national language after a mere semester of study.

Author of the popular “Learners’ Dictionary of Today’s Indonesian”, Quinn is now an honorary professor at ANU’s College of Asia and the Pacific, and has used Javanese-language sources to write a new book, “Bandit Saints of Java: How Java’s Eccentric Saints are Challenging Fundamentalist Islam in Modern Indonesia”. It paints his personal, vividly written portrait of Java’s culture of saint-veneration.

That phenomenon is apparent to even the most casual visitor to the complex country in the north, yet most Australians know little if anything about the daily practice of Islam.

“Bandit Saints” is no obscure, scholarly tome but one that explores religious issues looming large in Indonesia’s presidential and legislative elections coming up in April, where reformist, Arabicised Islam can be seen vying with what he calls “the colourful, half-hidden world of popular religion and its ancient stories”.

Quinn looks beneath the facade of modern Indonesia, well beyond party politics and media stampedes, to unveil a world of sacred places, eccentric saints and non-standard Islamic devotions.

The pilgrimage culture on the island of Java in Indonesia, he argues, is a rebuke to the conservative orthodoxy that has been gaining ground in Indonesia’s religious landscape since the 1980s, which presents the “real” Islam as pure and exclusive. But local pilgrimage is anything but pure and exclusive or rigidly authoritarian, powerfully Islamic while fusing Islam with local history, the ancient power of place and devotional practices with roots deep in the pre-Islamic past.

On Thursday, February 21, Quinn will be in conversation at the Asia Bookroom in Macquarie with Emeritus Prof James Fox, who has himself published on saints and sacred tombs in Java.

The bookshop says: “This book is a timely contribution to our understanding of the dynamics of religious change in the deep heart of modern Indonesia.”

Michael Moore - April 1, 2020
0
"The nation is underprepared to deal most effectively with the current challenges. Spending on prevention is like an insurance policy: it is difficult to see the value unless there is a disaster," writes political columnist MICHAEL MOORE.