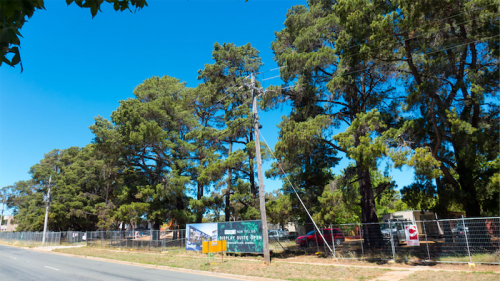 MORE than a decade ago Downer residents were dealing with the government’s questionable proposal to sell the former school site for a 300-unit apartment block.

This proposed complex included social housing, private apartments, commercial outlets, a childcare centre and kept the cherished courtyard with a much-loved sculpture. The commitment was that the heritage trees around the edges of this part of the park were under no threat.

Then around 2011 the Community Housing Canberra (CHC) bought the site through a direct sale given their community-housing brief.

The CHC reduced the number of units and the scale of the development. Its plans included social housing (what they do), private apartments, some independent living apartments (for aged people), childcare centre, the courtyard (sadly, the sculpture went missing) and all the surrounding trees, the birds and the biodiversity.

In 2019 almost none of the above applies except that CHC is still the developer.

Despite former rhetoric about how this development complex was to be integrated into the community and deliver a range of benefits back to the residents who gave up their school and this part of the Downer parklands, there are to be now no identifiable community benefits plus there will be the loss of all the previously heritage listed greenery.

Some are satisfied that the trees will be replaced. But they fail to comprehend that new plantings will most likely suffer a similar fate of others in Canberra. That is, given the way this government looks after trees, the maintenance will be minimal resulting in no significant growth in the lifetime of anyone alive today.

Then there is the role of the CHC – which is supposed to be delivering community housing. In this case it is simply acting as any other commercial developer and within that seems to little care for the character and heritage of the suburb.

While the CHC has worthy intent and has suffered from the mean hand of this government in having monies withdrawn from it, none of that justifies how it is going about this development and how it is the agency overseeing the destruction of this suburb’s heritage.

Other developers are forced to work around such significant trees. Why not the CHC? The story is complex and too long for this short opinion piece. But having carried out research in the time available, there is nothing obvious to why the CHC has not taken more steps to retain these trees and possibly seen to it that a long-term strategy was in place to see a timed replacement of any trees that may be in a bad way. There is no reason for the complete and simultaneous removal of all these trees. None.

Recently, there has been advocacy about trees and a new emphasis on heritage. However, despite the political speeches, constant consultations, petitions, the voices from lobby and residents’ groups, the many worthy green, eco-friendly associations and heritage groups, few are raising strong objections to the imminent removal of these magnificent heritage trees that are part of the historic character of Downer.

This serious loss of trees is a very perverse outcome to a long history of planning and development, time-consuming consultations and deals on this Downer site.

Is everyone too busy to notice? When the trees on Bradfield Street and part of Melba Street are all gone, maybe then locals will start to ask questions.

Anyone on the CHC executive or board and those of all colours within this government with an interest in the environment, heritage, planning, urban development, housing and the list goes on, they need to do a serious rethink about how they are sitting on the fence watching this heritage disaster unfold. Any of these people could change this outcome.

One year on: emergency services braced for hail and storms