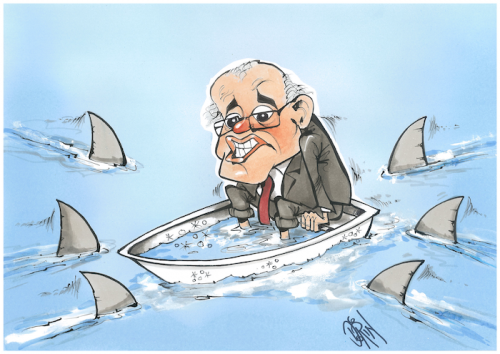 IN the old days, rats were the first to abandon a sinking ship. Sailors recognised the wily creatures’ own sense of survival. This sense of survival in the old maxim must have Liberals wondering just how bad the prognosis is for success at the next Federal election.

Senior Liberals abandoning the ship is just one indicator that the Liberal Party ship may well founder at the coming election. Stagnant polling, the exit of senior ministers, factional fighting and the inability to demonstrate gender equity are just a few of the indicators.

Polling is proving a problem for the Liberals. Despite deploying fear tactics over boat people and attempting to change the agenda on climate, the Liberals have not been able to shift their standing in the polls. Outcomes of the election do not look good with the Labor Party steady on 53 per cent of the two-party preferred vote while the Liberals remain at 47 per cent.

Nigel Scullion has represented the NT since 2001. Is his imminent departure from politics after 17 years because he is tired or because he could not see himself sitting as an opposition shadow minister for at least another six years? The same question could be put at the feet of Defence Industry Minister Steven Ciobo, who has also served 17 years in parliament.

Defence Minister Christopher Pyne has been one of the best performing strategists for the Liberal Party and steps down at just 51 years of age. He has been in Parliament for longer than his colleagues, serving 26 years. It is hard to believe he would be leaving if he thought there was much of a chance at returning to government. His reasoning is to pursue another career while still young enough.

Michael Keenan, Minister for Human Services, was elected to the WA seat of Stirling in 2004. He is part of the new guard in the Liberal Party and could have expected the opportunity to have very senior posts. The reason he has given is about the regular travel from Perth being so demanding, particularly on family.

A stronger indicator comes from senior women in the Liberal Party who will not contest the next election. Kelly O’Dwyer cited family reasons and the very eloquent Julie Bishop has argued: “The government will be returned to office because it is focusing on what matters to the Australian people. And on that basis, I have reconsidered my position”. At least the O’Dwyer reasons make sense.

However, the issue of women in the Liberal Party has taken the government into stormy waters. While the Labor Party has close to 50 per cent representation, the Liberals have been struggling to maintain 20 per cent.

The proportion of representation by women only tells part of the story. Support for the Liberal Party would have increased substantially had the very popular Bishop replaced Malcolm Turnbull rather than Scott Morrison or Peter Dutton. Despite Bishop being the most competent, the most media savvy and most intelligent of all of the candidates, it simply was not going to happen.

Revealed through the coup process was that the ultra-conservative arm of the parliamentary party simply would not countenance a woman as leader. No matter what the organisation, a culture of misogyny, or even reluctance to be genuinely inclusive, bodes ill for the organisation.

The Prime Minister’s “captain’s call” to parachute (former Labor Party president) Warren Mundine into the NSW south coast seat of Gilmore added to the woes. More so, in light of when he later said it is not his business to interfere with local preselection.

The forecast for HMAS Liberal Party is not looking good as she sails into even more stormy waters.