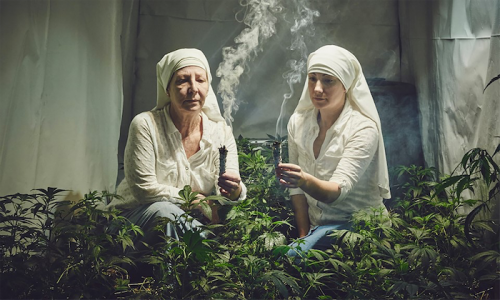 QUICK quiz. For what does the acronym CBD stand? No points for Central Business District. Full marks for cannabidiol. So what? Well, cannabidiol’s the clever cousin of THC which is what gives marijuana smokers the high.

Documentary maker Robert Ryan went to Merced County, apparently California’s least-well-heeled local-government-area, to film six women who have formed themselves into a group called the Sisters of the Valley. Led by shotgun-toting Sister Kate (not the one that the singer wished she could shimmy like!), their mission is to re-brand marijuana from an illegal drug to a source of cannabis pharmacological derivatives that medicine can be used to treat just about everything from spots before the ankles to inflamed nergulars (“nergulars”, a word created by Spike Milligan).

Forgive this levity. I write this on a chilly Good Friday morning in Melbourne where, while the sun may be shining brightly, warmth has yet to penetrate. Sister Kate has not led a comfortable life. About the initial half of “Breaking Habits” passes before Ryan tells us why she calls herself a nun and why she totes the shotgun. Kate has a mission and Merced County is not the most congenial location she might have chosen to preach it.

Kate’s mission is to decriminalise cannabis and replace the better-known effects of its THC with scientifically-funded health benefits from that CBD, essentially the same stuff except for a couple of different molecules.

The film discusses CDB’s medical benefits at shortish length. It listens to Sheriff Warnke explaining why anybody growing more than 12 marijuana plants (which State laws permit a person to grow for personal use) is a criminal and a threat to society. If it is necessary for a documentary to have a villain, it’s him. Insofar as his argument goes, he has a point.

Is Sister Kate’s countering argument also valid? I’d like to think it is. “Breaking Habits” offers a sort of scientific Promised Land on the other shore of a sea of legal prejudice against cannabis in any form.