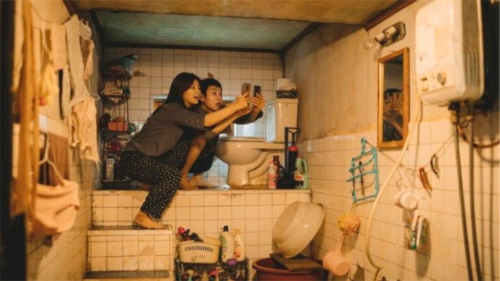 AFTER introducing its principal characters, South Korean writer/director Bong Joon-ho’s winner of the Palme d’Or at this year’s Cannes Film Festival settles down to a merciless examination of their behaviour, balanced with humour, that other essential ingredient of satire.

To function effectively, satire is best served with just enough wit to trick its audience into thinking that it’s serious, just long enough for recognition of the trickery to sink in.

“Parasite” delivers satire with wonderful wit more visual than oral (gags in its native language would be unavailable to non-speakers; literate subtitles pull no punches in their frankness.)

Satirical humour doesn’t have to be kind. Self-interest controls the behaviour of three families in “Parasite” as it examines the social and emotional roots of what drives them, from parents with adult children down to eight-year-old Da-song whose smallest wish commands parents and household servants alike.

So who are these people? The Kim family has fallen on hard times. Educated son Ki-woo gets a job teaching English to Da-hye, adolescent daughter of wealthy Park and Da-song’s mother, his spoiled, selfish, socially-ambitious wife Yeon-kyo.

Moon–gwang, the Park family’s housekeeper, holds a secret involving her husband Geun-se and the basement of the family’s architect-designed home.

By the time the film has introduced this lot together with Ki-woo’s parents, filmgoers have enough information to know the “who” of the story. Which brings us to the “what”, where wit meets humour, ambition, criminality, passion, violence, romance (across as well as within family lines) and, eventually, bloody resolution. Cinema is well equipped to deliver these elements of telling the story.

A wonderfully defined and performed dramatis personae, it delivers 139 minutes of very palatable entertainment with style and panache on a layer of social commentary saying useful things to filmgoers who want to hear them. “Parasite” led me to laugh outright in a cinema more often than in a long while.