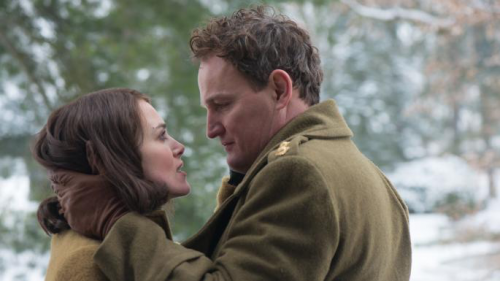 WHILE director James Kent’s film doesn’t set out to deliver a message or confront a major issue, its human dimensions and its dramatic development are structurally dramatically real and complex enough to provide entertainment values that sustain it right down to the wire.

Set in Hamburg in the first winter after the end of World War II, the screenplay by Joe Shrapnel and Anna Waterhouse introduces Rachael (Keira Knightley) whose husband, Col Lewis Morgan (Jason Clarke) is involved in managing the city’s recovery from the devastation caused on a single night by a greater mass of allied bombs than the Luftwaffe dropped on London throughout the blitz.

Lewis has commandeered the country house belonging to the Lubert family, occupied now by scion Stephen (Alexander Skarsgård) and his teenaged daughter Freda (Flora Thiemann). Stephen is pragmatic about the war’s outcome. Freda is not. Lewis allows them to occupy a small suite of rooms in the house.

Lewis goes to work every morning, leaving Rachael by herself in a strange land during a severe winter. She carries the agony of their 11-year-old son killed during the blitz three years earlier. Lewis’ battle experiences have suppressed his emotions. That he loves Rachael is certain, but the manifestations of that love are well suppressed.

Stephen is a widower, now working at tasks below his professional qualifications and social origins. Propinquity rears its head. A handsome widower and a beautiful but neglected wife carrying a burden of grief make for an emotional dynamic leading where you might expect. Meanwhile, Freda is associating with a young man still locked to the Nazi ethos.

The mixture is potent. For the filmgoer, the choices develop for Rachael and Stephen on one hand and Rachael and Lewis on the other. The narrative is leading to a choice between two inevitable denouements. Which one will survive? That leads the film to a conclusion that by the time it arrives has accumulated a satisfying tension.