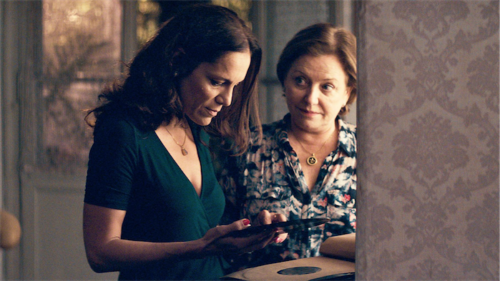 SINCE its release last year, Paraguayan writer/director Marcelo Martinessi’s film has gathered 36 awards from festivals around the globe including Sydney.

It has very few male characters but there’s no way it could be classed as a chick-flick. It’s a tour de force wryly celebrating women whose biological destinies are behind them but who cling to life because that’s what people do in whatever circumstances.

Chela and Chiquita have lived in a shared house as friends for several decades. With the money running out, they are now living by selling their chattels. Chiquita has signed a promissory note. When she defaults on payment, she is sent to prison, leaving Chela reduced to chauffeuring other women around the city of Asunción to and from afternoons at the card table.

It’s a lovely performance from Ana Brun, full of serenity. Waiting for Chiquita (Margarita Irun) to serve her time and come home, she engages a black servant Pati (Nilda Gonzalez). She visits the prison where she observes a different aspect of women’s reality. And she meets Angy (Ana Ivanova), a spectacularly handsome woman less a member of the group than an observer of their limited gossipy lives.

Although never married, Chela has needs which, in a sequence memorable for its delicate poignancy, she satisfies in her own way. Later, Angy offers an invitation to a more complex intimate experience which Chela rejects after coming to the brink. When Chiquita comes home and puts the car on the market, Chela’s world begins to crumble.

There’s much more to the story than these few passages. By its end, we feel deep compassion toward Chela. Martinessi’s subtle screenplay invites us to store bits of information to which it will later return with another piece of the jigsaw. And it provides a beautifully-understated denouement.