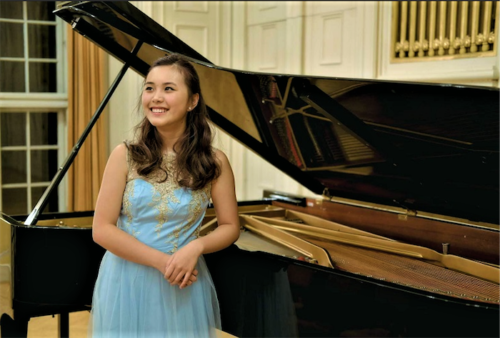 A 16-year-old Canberra pianist has won a place in the degree program at Universität Mozarteum Salzburg, a specialist music academy in the home town of Wolfgang Amadeus Mozart.

Bernice Chua, who began learning piano when she was four years old, will undertake a four-year bachelor’s course in Salzburg, Austria.

Consistently achieving A+ for AMEB piano exams over the years, she performed in the Canberra International Music Festival, in concerts at the ANU School of Music, and various embassies, and Wesley Music Centre, where she came to our notice as a Wesley Music Scholar.

She also participated in masterclasses with international artists and achieved top places in the Sydney and Australian National Eisteddfods.

At age 13, while studying at Radford College, she won the ArtSound Young Virtuoso of the Year. After studying here with Marie Cull, she travelled for two years to study with Canberra-raised pianist Bernadette Harvey, then headed to Salzburg for a pre-college course of one year under Prof Andreas Weber.

Bernice applied for early entry into the Austrian university and after surviving two rounds got in, putting on hold a music scholarship at Canberra Girls’ Grammar School.

Her mother, Rebecca Tong, describes her daughter as “very mature”. She’s rented an apartment for Bernice very close to the university.

Her enrolment examination, Bernice told “CityNews” from Salzburg, consisted of an instrumental audition where she had to play works by Bach, Beethoven, Liszt and Mendelssohn. She also sat exams in general music theory, elementary piano playing and German.

According to her mother, the plan is for her to return to Australia, but she says: “It’s much more normal for people these days to do a Masters and a PhD.

“It’s been her dream since she was very young.”