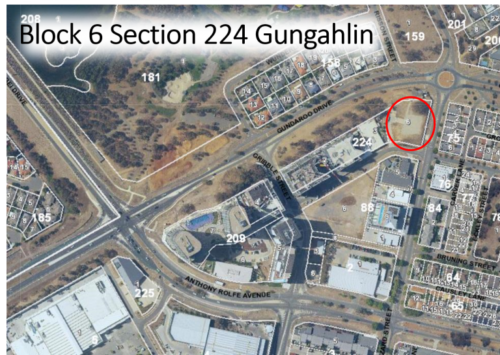 GUNGAHLIN Community Council has joined YMCA Canberra in lodging its disapproval for plans of a mixed use high-rise residential development to be built next to a YMCA early learning centre.

Called “The Establishment”, the development, led by Geocon and Empire Global, could see 290 apartments as well as commercial premises being built on the corner of Gozzard Street and Gundaroo Drive.

Since the approval of the development in 2018, YMCA Canberra has come out and voiced its concerns for the development because of its site location adjacent to the YMCA Gungahlin Early Learning Centre (ELC).

The development was approved despite significant community opposition, which generated 118 written representations against the development, according to YMCA Canberra.

“The key areas of concern were in relation to height, overshadowing, traffic, breaching of the Human Rights Act and the UN Convention on the Rights of the Child in regards to privacy of the children in the ELC, and the removal of a registered tree,” YMCA Canberra said.

The current plans mean the centre would share a narrow driveway with the development.

The Gungahlin Community Council has joined in voicing its opposition against the development, and today, posted its full objections on its website.

The council had opposed the original development application when it was submitted in November 2017, but despite 118 representations being made, the DA was approved in September 2018.

The council says it remains opposed to this development for the following (original) reasons:

Backing the YMCA, the council’s objections around the development also state: “The actual driveway entrance to the ELC and development is narrow and currently is rarely used as a two way entry and exit. Instead cars often cue along Swain Street waiting until they can enter through the middle of the driveway. The traffic report fails to address this and how having up to 300 residents exiting could make it impossible for parents of the ELC to access the driveway let alone safely park, do drop off or pick up, and then reverse and exit again. All of these streets and roads are narrow and already heavily congested.”

Earlier this week in a news report Geocon director Nick Georgalis told the “Canberra Times” that the driveway had already been approved in a previous application and was not up for consideration. He also said safety would be a paramount concern.

An amended development application (DA) for the mixed use high-rise residential is currently open for public comment until June 9.

CityNews - July 14, 2020
0
Canberra's top traffic cop is warning drivers of the serious charges that speedsters face, including imprisonment, after one driver blamed his speeding on being tired.