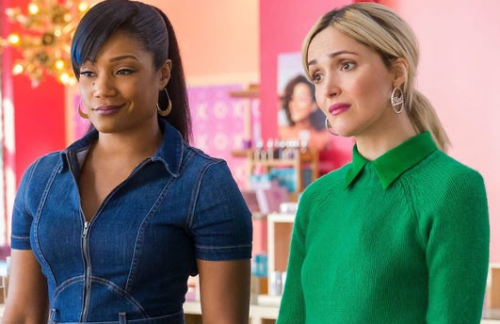 Rose Byrne and Tiffany Haddish play Mel and Mia, chums since college, living, working and partying as one, now running a beauty aids store, financially incompetent although their products are good. Which is what beauty-aids tycooness Claire Luna (Salma Hayek) covets enough to offer to buy them out.

That’s the guts of a movie that has made reviewers smile, not because it’s funny ‘cos it’s not, but for the opportunities it gives for creative similes. For example, “flat loaf, which isn’t just flavourless but half-baked” (“Washington Post”); “comedy on life support, with Haddish and Byrne valiantly performing futile acts of resuscitation. Sorry to report: the patient died” (“Rolling Stone”).

It’s not so much a failure of the cast to deliver. The cause of the film’s wide dissatisfaction among the reviewing fraternity is its dopey screenplay, which fails to mould the basics of the shooting script into any kind of cogent understanding of what it’s about. Mia’s happy about accepting the invitation to sell. Mel isn’t. Fair enough.

But “Like a Boss” lacks any sense of ethics or political awareness. It peddles sisterhood on the basis that there’s something inherently funny about women cursing, having sex and getting stoned, behaving like male stereotypes. Its jokes are coarse – no problem with that. Its sight gags do the performing talent no respect.

The studio bosses who green-lit production of “Like A Boss”‘ are as responsible for its fiasco as are the folk behind the camera who might have adjusted its shortcomings on set during the shoot – unaware of the reality that women are as human as men with the same complexities, habits and feelings.

CityNews - October 23, 2020
0
MORE than 70 notable Australians have signed an open letter to the Prime Minister in support of the Australian Heritage Council and opposing the $498m Australian War Memorial redevelopment.