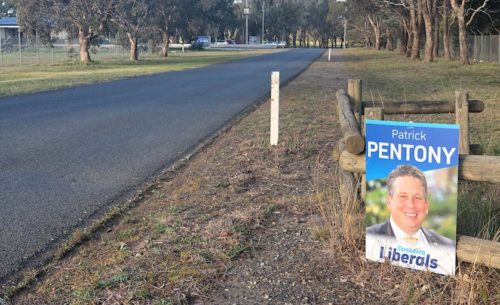 SIX weeks out from Saturday’s election, City Services rangers removed more than 2100 corflutes that were in breach of the “Public Unleased Land Act 2013” code of practice”.

And, under the introduction of an ACT government-led corflute recycling trial, more corflutes are expected to be removed if candidates don’t take down their election signage 48 hours following the closure of polling booths.

Signs that are removed and retained by City Services rangers will be held for seven days following a notice of seizure being issued to the owner.

“Care will need to be taken to remove contamination such as paper, glue, wood, metal and plastic fixings from the corflute signs to enable them to be recycled,” Mr Haraldson says.

Helen Musa - November 25, 2020
0
When the Hive owner and curator, Helen Ferguson, agreed to provide an exhibition award for the Queanbeyan-Palerang Regional Council Regional Arts Awards, she had no idea of how challenging it would be, writes arts editor HELEN MUSA.