TOPIARY, bonsai, cloud pruning – what’s the difference? None really, it’s all about training plants to grow a specific way.

Cloud pruning, or shaping the plant to resemble clouds, is a Japanese concept known as Niwaki. Popular in the far east and the USA, it’s only just catching on here, though in its simplest form it’s training buxus into a ball shape.

Topiary, especially in grand estates, has been favoured in Britain for centuries, with extreme rivalry between head gardeners. I’ve seen topiary pyramids, peacocks, even teddy bears and a complete hunting scene of a fox chased by hounds. As well as box, taxus or yews are often used. The latter unfortunately don’t grow well in Canberra. The Romans were masters in growing buxus, of which the so-called English box originated in the Mediterranean. Small-leaved holly, such as Ilex aquifolium “angustifolia”, can be clipped into shapes and will hold for long periods with very little pruning. This is ideal for low hedges. Other suitable plants include dwarf escallonia, rosemary and dwarf conifers.

AN environmental weed invading gardens at the moment is galium aparine, commonly called sticky weed. Besides being a menace in the home garden, this invasive species is causing real problems in cereal crops. It is easily recognisable with its climbing, clinging habit of hooked hairs. It can cling to every plant in the garden, as well as clothing and animals. This aids its dispersal and spread. Fortunately it’s easy to pull out, being shallow rooted.

ANOTHER problem in our garden is wild viola, currently smothering the Michaelmas daisies, or asters. There’s only one course of action: dig out the lot. This has given me the opportunity to separate the two, so I can pot up the daisies for plant stalls, or plant in bare spots in the garden. Wild violas go into the Trash Pak, not the compost heap.

ONE of my pet hates is the changing of well-known plant names, often into impossible tongue twisters. As explained by the Royal Horticultural Society, it would now appear that Eurasian and American asters are quite different families, although they have almost identical flowers. So the common Michaelmas daisy from Europe which we all know as aster novae-angliae, now becomes symphyotrichum novae-angliae.

NOW is the time to plant almost all veggies, including potatoes. Remember, if they’re for sale at garden centres it’s time to plant. And do keep deadheading roses to keep the blooms coming. Potted outdoor plants need feeding more often than those in the ground, as any fertilisers tend to leach out with regular watering. 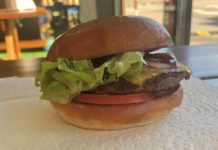