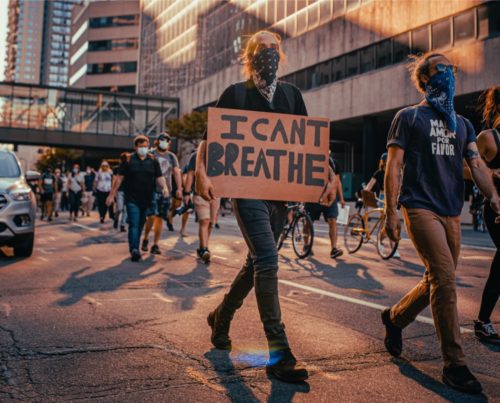 These words are not the words of George Floyd or Eric Garner. They weren’t uttered on the streets of Minneapolis or New York.

These are the final words of a 26-year-old Dunghutti man who died in a prison in south-eastern Sydney.

David Dungay Jr was killed when prison officers restrained him, including with handcuffs, and pushed him face down on his bed and on the floor. One officer pushed a knee into his back. All along, Dungay was screaming that he could not breathe and could be heard gasping for air.

Dungay’s death in custody occurred in Long Bay prison during the 2015 Christmas season. It happened a short drive from an elite university, next to affluent, waterside suburbs.

But his horrific death did little to pierce this white bubble of privilege. The media barely blinked. The politicians did not emerge from their holiday retreats. None of the officers involved were disciplined or called to account.

This is evident in Prime Minister Scott Morrison’s comments to 2GB on Monday: “And so as upsetting and terrible is the murder that took place, and it is shocking … I just think to myself how wonderful a country is Australia.”

It is “wonderful” because we do not see the horror inflicted by the criminal justice system on First Nations people.

It is “wonderful” because we do not ever call their deaths in custody “murder”, using instead the euphemisms of “accident” or “natural causes”.

It is “wonderful”, because we have so normalised the passing of First Nations people that we are never shocked when they are killed.

It is “wonderful”, because we have a vocabulary to defend police officers responsible for racist violence, including people doing an “extremely difficult job”.

The official response to the killing of Dungay has wide ripples in the white Australian community and the legal community. His family maintain that the killing of their son, brother and uncle, who was unarmed, was murder. No criminal charges have been brought and the coroner in November 2019 blamed Dungay’s pre-existing health conditions.

His comments minimised the responsibility on the part of the officers: “it is most likely that the cause of David’s death was cardiac arrhythmia. It is noted that David had a number of comorbidities, both acute and chronic, which predisposed him to the risk of cardiac arrhythmia … However, the expert evidence also established that prone restraint, and any consequent hypoxia, was a contributing factor although it is not possible to quantify the extent or significance of its contribution.”

First Nations people are the most incarcerated in the world

The deaths in custody of First Nations Australians are not hidden. As a nation, we are choosing not to look at them. In 1991, the Royal Commission into Aboriginal Deaths in Custody documented 99 deaths in custody.

Since then, 432 Indigenous Australians have died in custody, according to Guardian Australia’s Deaths Inside project.

First Nations people are the most incarcerated in the world, surpassing the rates of African American people in the United States. In 2019, for every 100,000 First Nations adults, 2,481 are in prisons, compared with 164 non-Indigenous people.

Despite comprising 2 per cent of the general adult population, First Nations Australians are 28 per cent of the prison population. For First Nations women, the rate is 33 per cent and they are 21 times more likely to be imprisoned than non-indigenous women. This is a product of systemic racism that also contributes to disproportionate deaths in custody.

Yet the deaths are only the tip of the iceberg. Everyday occurrences of police brutality against First Nations people, frequently filmed and uploaded on social media platforms, have even less formal oversight. The casual complacency about the harm inflicted on First Nations people means we do not know the true extent of its occurrence.

On Tuesday, a NSW police officer was put on restricted duties after a video emerged on social media of him appearing to kick an Aboriginal teenager.

Protesting deaths in custody in our backyard

In the wake of Floyd’s death, Dungay’s nephew, Paul Silva pointed to the lack of response to First Nations deaths in Australia:

“We don’t get the same big response in Australia as they do in the United States with the Black Lives Matter movement, but we have had many people, both First Nations and non-Indigenous people standing with us. We can build on that – we need many more to join us. We can take inspiration from the United States and get back out on the streets in our own backyard, where there is so much brutality against Black people too, that’s the only way to get justice.”

While the spotlight has been shone on the protests in the United States, most Australians would be unaware that each year on the anniversary of Dungay’s killing, there has been a protest, mostly at Long Bay jail.

This week in cities around Australia, protests are planned in the name of First Nations people who have died in custody. The numbers of those who converge on the streets is a litmus test of national tolerance for racial violence against First Nations people in the criminal justice system.

Where does racial violence against First Nations people end?

Despite more than 500 First Nations deaths in custody since 1980, there has never been a successful homicide prosecution in the criminal courts. Indeed, only a handful have resulted in charges being laid in manslaughter or, less frequently, murder.

A police officer has been charged with murder following the shooting death of a 19-year-old Warlpiri man last year. The officer intends to plead not guilty.

The Victorian Coroner this April also referred the death of Yorta Yorta woman Tanya Day to prosecutors for further investigation.

Without accountability, justice will not flow for the families and the chain of racial violence will not be broken.

The danger of expressing outrage towards African American deaths in custody is that we deflect our own agency and responsibility. We legitimise the violence at our doorstep that is in our control.

It allows us to walk past racist police interventions on the false assumption that the problem is with the First Nations person rather than the police and Australian culture.

The only response to racism is resistance. This must take place not simply in passive solidarity with African Americans, but in our active support, protest and sacrifice for the lives of First Nations Australia.

Thalia Anthony is a professor of law at the University of Technology Sydney. This article was originally published on The Conversation.

Cedric Bryant - July 14, 2020
0
Gardening writer CEDRIC BRYANT’s thoughts are turning to spring, pruning, and sprucing up tools and furniture for the warmer weather.