“The nation is underprepared to deal most effectively with the current challenges. Spending on prevention is like an insurance policy: it is difficult to see the value unless there is a disaster,” writes political columnist MICHAEL MOORE.

THE conservative notion of “small government is best” belongs on the dung heap.

Throughout the last half century there has been increasing pressure to reduce bureaucracy and cut taxes. The approach: minimise the role of government, increase laissez faire.

However, the advent of COVID-19 shows just how important governments are in protecting populations.

There is no part of industry, or even a coalition of big companies, that would be able to handle the current crisis over a single virus. Without significant government intervention, the death rate in Australia and internationally would have been astronomical. Conservatives largely believe the power of the individual rather than that of the state to deliver a good society.

In a scathing attack on large government and Americans who vote Democrat, Dennis Prager wrote in “National Review”: “The government’s role in society should be limited to absolute necessities such as national defence and the resource of last resort to help citizens who cannot be helped by other citizens, private organisations or charities.”

There is some truth in every argument. Australians value the freedoms of our society and worry when they are whittled away. Perhaps conservatives might argue that overcoming the COVID-19 threat is a defence role – and therefore governments do have a role to play.

However, the conservative attacks on the stimulus package of Kevin Rudd to deal with the Global Financial Crisis tell a different story.

Even years later, Tony Abbott claimed “the former government were spending like drunken sailors”. Conservatives resist anything that interferes with allowing the individual to accumulate wealth through hard work.

The prime driver for small government is lowering taxation. This is largely driven by large corporations.

The challenge presented by the advent of COVID-19 is the cost of the response. Australia’s stimulus will likely cost hundreds of billions of dollars in order to protect small business, to protect workers, to protect individuals and to increase health expenditure.

Where will the money come from? As COVID-19 is an international challenge, perhaps the solution lies internationally.

At what point will the international community bite the bullet and close down tax havens such as those in the Bahamas, Bermuda, the Channel Islands, Jersey, Liechtenstein and Monaco? This might be a long-term solution, but COVID-19 provides an appropriate catalyst.

The ability of large corporations and the super wealthy to hide their money from fair taxation simply leaves the burden on other taxpayers. It is patently unfair.

In the short term, Australia has the capacity to increase debt. This will also increase the deficit. As Prime Minister Scott Morrison was attempting to make a religion of taking Australia into surplus, the US (in 2019) was running a deficit of over a trillion US dollars. At the same time their national debt was more than $US20 trillion. And its economy was growing.

The traditional ways to reduce debt are to tax more or to spend less. Cut government departments and government services versus taxation. Taxing less is now out of the question if there is any chance of the government successfully restoring the economy or being able to assist people who lose their jobs or contract the virus.

This COVID-19 crisis reveals that the right-wing mantra of smaller and smaller governments is indefensible.

The constant reduction in government spending on preventive health and cuts to health research funding, as a percentage of overall expenditure on health, is a disaster. The nation is underprepared to deal most effectively with the current challenges. Spending on prevention is like an insurance policy: it is difficult to see the value unless there is a disaster.

The choice is an increase in taxation or major, major cuts to expenditure. At a time when social welfare and health are critical, these are not areas to be cut. The other big items in the budget are education and defence. Conservatives have been cutting education already, but are unlikely to cut defence. The outcome will be an increase in taxation. The key question is: will big business pay its fair share? 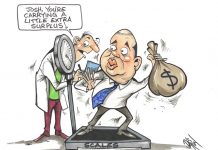 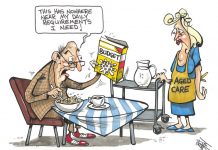