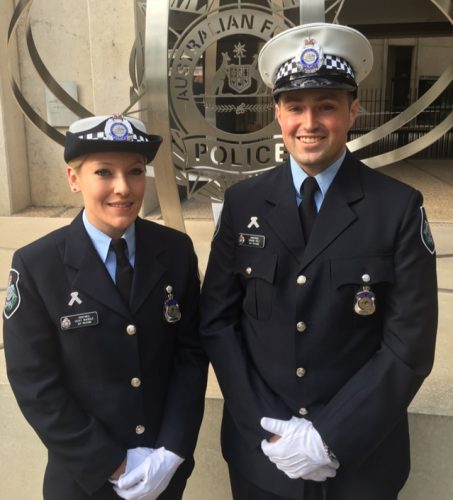 A FORMER postal worker, a forensic archaeologist, a student pilot, an intelligence analyst and a marine mechanic have all joined the ranks of the ACT police.

The territory's frontline of the community arm of the Australian federal police has inducted 27 new recruits on Friday (May 4) at the force's latest graduation ceremony.

Minister for Police and Emergency Services, Mick Gentleman, attending the historic day, was amazed that law enforcement has the ability to attract specialists from other fields.

"Their diversity and life experiences will stand them in good stead too, as they begin their community policing careers in the ACT," he said.

The 11 women and 16 men - from a larger class of 38 recruits - will be deployed off to a number of stations across the territory.

The ACT government committed $33.9 million in 2019 to fund 60 additional staff for ACT policing.

Mr Gentleman said the graduates, who successfully completed the 24-week federal police development program that began in November 2020, have pledged to keep the streets of Canberra safe.

“Our police do a fantastic job keeping Canberra’s crime rate low and we are supporting them in this important work,” he said.

More than 900 staff remain employed across all forms of ACT policing operations that includes around 600 sworn-in officers.

The new police members will work under the Capability and Community Safety portfolio.

"The deployment of these new recruits is delivering on our commitment to grow police numbers across Canberra,” Mr Gentleman said.