“Today is the beginning of a big game changer,” remarked Scott Morrison as the vaccine rollout began, even as Newspoll figures showed the government and opposition remain deadlocked, writes political columnist MICHELLE GRATTAN.

The first recipient was aged care resident Jane Malysiak, 84, from Marayong New South Wales, who was born in Poland and came to Australia soon after the World War II.

Sunday’s line up for the Pfizer shots included, apart from aged care and disability residents, workers in these sectors, and quarantine and border workers. These are the priority recipients for the first round of vaccination.

Chief medical officer Paul Kelly and chief nursing and midwifery officer Alison McMillan also got their shots, with McMillan assuring “it really doesn’t hurt at all”.

Morrison, decked out in an Australian flag mask, sat beside Malysiak, and encouraged her to follow his “V for Vaccine” sign – this went slightly awry when Malysiak’s fingers inadvertently turned in an “up yours” direction.

Morrison averted his eyes from the needle as he received his shot.

The Prime Minister called on the community to follow his and the other recipients’ example to “join us on this Australian path that sees us come out of the COVID-19 pandemic”.

He said he wanted Sunday’s pre-rollout vaccinations to give confidence.

“Tens of thousands of people will be coming in tomorrow and I wanted them to know as they went to bed tonight that we have been able to demonstrate our confidence in the health and safety of this vaccination,” he said.

“Today is the beginning of a big game changer.”

Sunday’s figures recorded no community transmission anywhere in the country.

As the rollout starts, Newspoll showed government and opposition remained deadlocked on 50-50 on the two-party vote, but Scott Morrison extended his lead over Anthony Albanese as “better prime minister” to 61-26 per cent (previously 57-29 per cent). The poll is published in Monday’s Australian, and was taken Wednesday to Saturday.

Labor’s primary vote rose one point to 37 per cent since the previous poll three weeks ago; the Coalition was steady on 42 per cent.

Albanese’s net approval is minus seven, following a three-point fall in his satisfaction level to 38 per cent and a two-point rise in dissatisfaction to 45 per cent.

Although it has not hit his Newspoll numbers, Morrison will continue under pressure in parliament this week over who knew what in his office about the alleged rape of Brittany Higgins.

The Weekend Australian reported a second former Liberal staffer who alleges she was raped last year by the man named by Higgins.

Higgins has alleged she was raped in 2019 by a colleague in the Parliament House office of the then defence industry minister Linda Reynolds, for whom both she and the man then worked.

Asked about the second allegation, Morrison said at the weekend: “I’m very upset about those circumstances”.

He said he did not know who the woman was.

Late Sunday night, The Australian reported a third woman – a Coalition volunteer during the 2016 election campaign – has alleged she was sexually assaulted by the same Liberal staffer days before the election.

Higgins will lay a formal complaint to the police on Wednesday, which will start an investigation.

The Prime Minister said the inquiry by his departmental secretary Phil Gaetjens into who in the Prime Minister’s office knew about the Higgins rape allegation was to be finished “as soon as possible”.

Morrison has said he first knew of this allegation on Monday of last week, when the story was published, and his staff only knew the Friday before that, which was when journalist Samantha Maiden asked his office questions.

He made it clear he was angry he wasn’t alerted to Maiden’s inquiries. “I’ve expressed my view to my staff about that very candidly on Monday.”

The Special Minister of State, Simon Birmingham, indicated at the weekend that Higgins would be able to contribute to the terms of reference for the independent inquiry Morrison has announced into the workplaces of parliamentarians and their staff.

Higgins said in her Friday statement she had “advised the Prime Minister’s Office that I expect a voice in framing the scope and terms of reference for a new and significant review into the conditions for all ministerial and parliamentary staff”.

Birmingham said: “All past and present staff, including Brittany Higgins, will be able to participate in the review.

“I also welcome the input of past and present staff on the terms of the independent review and will be engaging accordingly.” 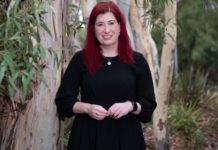