THE ACT has more heritage locations considered at risk than any state or territory, The Australian Council of National Trusts revealed today. 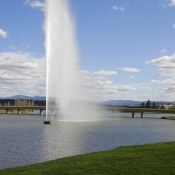 The “Our Heritage at Risk” program, now in its sixth year, is intended to raise awareness of heritage issues in Australia by identifying valued places and objects at risk.

The ACT has three of the 10 sites in Australia listed by the trust to be most at risk, including the Lake Burley Griffin West Basin, the Law Court Building and Housing Precincts of Ainslie, Blandfordia5 (a section of Griffith) and Reid, where demolitions are planned.

The trust is concerned about plans to infill a section of Lake Burley Griffin to make way for the Australia Forum and a possible new Canberra Stadium.

The ACT Government’s plans to gut the Supreme Court building and replace it with a more modern design, adding another storey to the structure is another area of concern.

The whole of the Murray Darling Basin was again nominated as a region of natural, historic and Indigenous values at risk due to the delays involved in producing an effective management plan, which would ensure sufficient and sustainable flows for the environmental needs of the system and the agricultural practices, which are vital to all Australians.

“Our heritage places, natural, Indigenous and historic are important in understanding our past and who we are and how we as a nation can conserve them for future generations.  By raising awareness of the inherent values and the risks to our heritage, as this program does, we hope to avert losses and retain the places that are important to us,” Chairman of the Australian Council of National Trusts Dr Graeme Blackman says.

The final list for 2012 was derived from places throughout Australia identified by public and National Trust nominations earlier this year, and includes nominations includes single and groups of buildings, housing precincts, and ecosystems, which have natural, historic and Indigenous values.