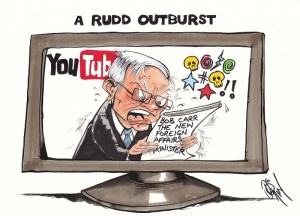 THE vote to reject Kevin Rudd’s bid was only a few hours old when the “new Labor” came out fighting.

The relentless repetition of the new approach is now upon us in three main ways – we will hear again and again firstly, the achievements of Labor compared to the failures of the conservatives; secondly, the unity of the party and thirdly, the reiteration of a range of slogans in the vein of “working families”.

Former Liberal Peter Slipper, as Speaker, has helped strengthen the numbers for Prime Minister Julia Gillard’s government. The nomination of former NSW Premier Bob Carr to replace Mark Arbib in the Senate and then to serve as Foreign Affairs Minister reinforced her ability to find the right person for the job and will strengthen the ministerial team.

The first element of the three-part formula is Labor singing its own praises about its achievements while bagging the Opposition. They will talk about “selling what we have achieved”.

In a Matter of Public Importance, raised by Victorian Liberal Senator Mitch Fifield soon after the leadership vote, purportedly on “The failure of the Gillard Government to run an honest, transparent and accountable administration”, Senator David Feeney blasted back with the Labor strategy, part one – move the focus on to the conservatives: “Mr Abbott’s government will repeal the carbon price, the mining tax and the means testing of the private health insurance rebate, increase government spending in various areas and yet somehow bring in a Budget surplus.

WA Liberal Senator Dr Chris Back said: “It is amazing to be lectured by the Labor Party on economic responsibility – I am reminded of Dracula and the blood bank!”

Labor unity will be the second part of the strategy.

“Getting on with the work of government”, “putting the Rudd fiasco behind us”, “looking forward”. Labor knows how damaging the disunity has been and now the members know that they have no choice but to get on and work together if they have any chance of returning to parliament at the next election. This is the strongest motivator.

Labor will now start to experiment with slogans. How often did we hear the term “working families” a few years ago? Ad nauseum! The Prime Minister is talking in terms of “we now need to move forward” then there is the “Building the Education Revolution”. They have dealt with the health “blame game” and now will find a way to sloganise the National Broadband Network.

There are not many people putting money on Labor to win the next election. The strategy will give them a chance. Provided they don’t keep tripping over their own feet, Julia Gillard ought not be written off as a contender.