While the 2CC drive presenter looks at home in the official picture, 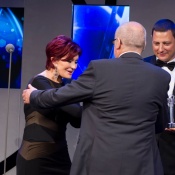 what is it in the other shot that’s caught the eye of celebrity prize presenters Sharon Osbourne and Merrick Watts? “CC” thinks it’s a fly malfunction, but will accept any other smartarse opinions at confidential@citynews.com.au

Tale of two parties… money was no object as Labor celebrated its election status quo into the night at the National Press Club – with the bar tab on the party. While round at the Libs’ knees-up at Eastlake Club, “CC” noted partygoers lined up at the bar paying for their drinks.

IT seems Centenary of Canberra creative director Robyn Archer can’t help but steal a show, even if she’s not on stage – or in the country, for that matter.

During a top-secret Centenary project briefing, the audience was treated to a news report on Robyn – who was on a plane from London at the time – about her recent delivery of the Arthur Boyd Lecture. That was all well and good, but just as Zoo Advertising MD Clint Hutchinson finally had his chance to step up and capture everyone’s attention, Robyn’s news report accidentally began an encore performance on the big screen. An embarrassed Centenary of Canberra executive director Jeremy Lasek tried desperately to stop the video, but alas, Robyn was not to be silenced – and off she went, stealing the show again!

2CC breakfast announcer and mad cyclist Mark Parton, who was kindly helping out a Save the Children lunch at Old Parliament House as moderator, brought the house down when he wrapped up, sincerely thanking keynote speaker “Dr Lance Armstrong”. He meant Dr Lance Emerson, CEO of the Australian Research Alliance for Children and Youth. “Give me a break, I’ve been up since 2.45,” he whimpered in defence.

PERSONABLE and popular Rick Coate, GM of the Royal Canberra Golf Club for the past four winters, is throwing away the frosty greens for the sweltering confines of the terribly posh Hong Kong Cricket Club in January.

Established in 1851 “to promote the game of cricket, tennis, croquet and other athletic sports and pastimes”, it’s the oldest cricket club in Asia, with more than 2300 members and a staff of more than 200.

But it’s another world: in his latest club newsletter, Rick’s predecessor writes: “If guests are invited into the club by a member, they should be properly recorded in the guest register at reception – and if that guest is a private servant, that they be treated as a guest and not carry out the function and duties of care to children in the company of the member.”

Giving it all away

WHILE “The Canberra Times” takes self-promotion of its free iPad app to orgasmic heights, it is sobering to see them effectively giving the paper away, in every sense.

The august Australian Newspaper History Group’s latest newsletter has a table charting the audited circulation of Australian metropolitan newspapers now and 10 years ago. It exposes “The Times” as the nation’s worst performing, with the largest Saturday slump over the decade of 34.96 per cent, the worst-performing weekday paper in the land with a fall of 26.22 per cent and second only to the Sydney “Sun Herald” on Sunday, with a fall of 25.44 per cent. And they’ll be better on digital because?

LOOK carefully at this besuited man… for he is wearing pyjamas. Following the bewildering popularity of the snuggie and the adult onesie, here come the $90 Suitjamas, the creepy satin pyjamas that look like a man’s lounge suit. 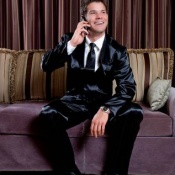 Fans of TV show “How I Met Your Mother” will recognise the four-piece pyjama suit popular with character Barney Stinson.

According to some bumph sent to “CC”, Suitjamas ensure the wearer looks suavely sophisticated any time of the night. Suitjamas are made from satin material and have an elastic waistband so they can comfortably be worn to bed. Reassuringly, a clip-on tie completes the look, without being a choking hazard. They’re available at www.suitjamas.com