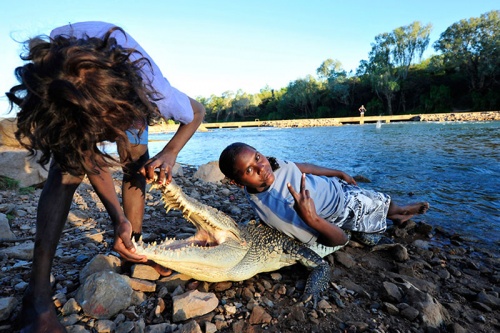 CALL the cops! That’s a croc those kids are messing with!

Happily, all is not what it seems. The photo is part of an exhibition by in-demand photographer Darren Clark at the CSIRO Discovery Centre. Clark travels widely to photograph remote parts of Australia.

Arts consultant Suzie Edwards says the children were swimming in a river in northern Australia, but leapt from the water when they saw the two-metre croc haul itself on to the bank – and die. That’s right, dead, at that very moment.

“After the kids determined it was dead by throwing stones at it and prodding it with a stick, they then started investigating it,” she said.

The local plod hauled the ex-croc away to rangers, who discovered it had croaked from eating a cane toad.