THE traditional Christmas tree is Picea abies from Norway and is readily available from most garden centres.

The use of a fir tree at Christmas has a fascinating history lost in the depths of time. The modern use of the fir tree took off in Germany in the 19th century. The custom was introduced into England by Queen Victoria’s husband Prince Albert. Originally decorated with dates, apples and nuts it is often associated with Martin Luther and was basically originally a Protestant custom.

In Scandinavia, houses and barns were decorated with conifers at the New Year to frighten away the devil. Hans Christian Andersen’s fairy tale “The Fir Tree” told of the tree’s fate to be used as a Christmas tree.

Our very own Aussie conifer is the famous Wollemi Pine, pictured here at the Heritage Nursery, Yarralumla, where there is a large selection from small to huge.

FLOWERING houseplants are popular as decorations on the Christmas luncheon table and as presents. The most popular houseplant in the world is Euphorbia pulcherrima or Poinsettia. Not technically a flowering plant, the flowers are tiny and quite insignificant in the centre of the plant. Its popularity is due to its brilliant red bracts. There are now more than 200 varieties available, red still being the most popular – and most associated with Christmas. Why red, I wonder, maybe it enables Father Christmas to be seen easily in the snow?

ON the other hand, you may prefer one of the other colours from pink to pure white and cream. Poinsettias originated in Mexico and Guatemala in semi-arid regions. They were introduced into the US in 1825 by Joel R. Poinsett, the first US ambassador to Mexico.

The Aztecs used the plant for red dye and medicinally. In Mexico, it is known as Noche Buena or Christmas Eve. From that time on it took the world by storm and is available here in every garden centre at this time.

What to do with the chooks?

IN planning for trips away during the holiday period, the garden is often forgotten. Beyond the usual issues of watering and mowing, what to do with the chooks? Most other pets are easy to deal with at a kennel or cattery, but there are few places that take chooks.

Maybe this is not a worry as they may end up on the Christmas table!

The incentive for a friend or neighbour to feed them is to collect the fresh eggs at the same time as walking around the property to ensure nothing is amiss. Chooks are great for the garden, eating the scraps, if under apple trees eating the codling moth and other pests before they get to the fruit. Plus manure for the compost heap.

Meanwhile, here are a few garden reminders to give you time to get organised: 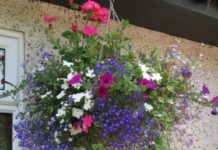 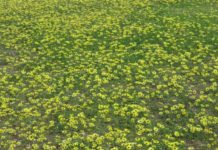