AS far as photographer Heide Smith is concerned, it is quite obvious, Canberra is a hotbed of  intellectualism and creativity. 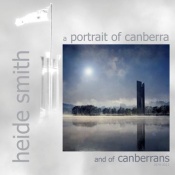 Last week “CityNews” popped over to the Canberra Museum and Gallery to see Robyn Archer launching Heide Smith’s newest book, “Portrait of Canberra and of Canberrans, 1979 – 2012,”  a 220 page hard cover book  containing approximately 230 black and white and colour images of landscapes and portraits. You can see the  Who’s Who turned out by looking at our social photographs this week.

And no wonder. Anyone the formidable Smith has photographed, from journos to judges, is someone with character, and that includes several hard-working tradespeople she has photographed affectionately.

Mostly, she likes the famous Canberrans and that’s what makes it such “a good read.”

But there’s no getting away from it,  of the most poignant portraits are of leading figures in the arts, many of them looking fresh and youthful as they embark on their brilliant careers.

You’ll find the country’s leading thinkers,  like the late Mark Oliphant, Frank Fenner and Manning and Dymphna Clark, whose former home in Forrest will be the scene of a small exhibition of archival prints from Smith’s new book from this Sunday.

Smith is quite an institution in Canberra, and has been photographing Canberra for more than 34 years. Few  will forget her series of portraits of prominent women, including then Federal Minister Ros Kelly, swathed in red cloth.

But in spite of her love for  Canberra, she  and her husband Brian have lived in Narooma since 1998, though she  continues to photograph families and celebrities.

Readers should note the following advice from the organisers: “Manning Clark House chooses not to pass on exhibition costs to their artists. We charge a modest entry fee to the opening to cover catering. Entry: $10 ($7 members).”