THE opposition has demanded Chief Minister Katy Gallagher provide “full disclosure” after new revelations she met the woman behind the Canberra Hospital data doctoring scandal, Kate Jackson, during a 2010 holiday in France. 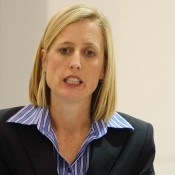 She has since resigned from the ACT Health Directorate.

Gallagher confirmed yesterday while on holiday in France she stayed with her her sister – an employee at the Canberra Hospital – and that Jackson, a friend of her sister, also visited.

It was also revealed that Jackson had attended Gallagher’s 40th birthday party as a guest of her sister.

But Opposition Leader Zed Seselja believes Gallagher is deceiving the public about her relationship with Jackson.

“The Canberra Liberals are demanding that Katy Gallagher now be finally open and accountable with Canberrans and provide full disclosure of all documents relating to this deception,” he said.

“This includes a transcript of the information given to the Auditor General, legal advice received from the Solicitor General and any other advice Katy Gallagher received on this issue.

“A failure to disclose this information will just add another layer of deception to a tangled web of misleads, half truths and omissions stated by Katy Gallagher on this issue.”