A collection of 16 photographs of rodeos taken in  Queanbeyan and surrounding regions will be seen at the Tuggeranong Arts Centre next week under the title “Buck’d Off.”

The exhibition is local photographer Grace Costa’s first solo show. By day a photographer with the Australian Defence Force, Costa has a second life.

“Nothing beats that rush you get when a crazy bucking bronco is coming right at your lens and dirt and dust is flying everywhere,” she says. “Being up-close with just eight seconds to capture that perfect moment that tells a story is a great challenge”.

Costa says she was first introduced to the rodeo circuit by her father when she was a teenager and has also grown up in a family that owned horses.

There is a more serious aspect to the exhibition, which she sees an opportunity to raise awareness and funds for the Prostate Cancer Foundation of Australia with a silent auction being held at the official opening on March 3.

“Rodeos are quite a male-dominated industry so the exhibition is a great opportunity to create better awareness of the disease and encourage more men to get regular health checks… no-one is invincible and it’s really important men look after their health—and talk to each other as well.”

Ms Costa’s father is a survivor of this disease and it turns out, one of the cowboys that features in the promo poster lost his father last year to the disease.

Buck’d Off will run from March 1-20 at Tuggeranong Arts Centre, with the official opening night on Saturday March 3 at 5pm. 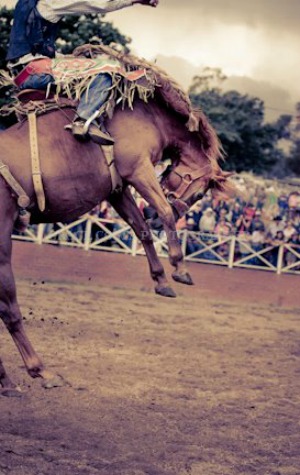