OVER the next few months Canberrans will see screens going up at bus stops and interchanges all over town, telling them if their ride is running late. 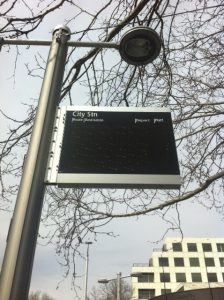 ACTION’s new real-time information system NXTBUS begins its testing phase with 20 buses next week, initially for drivers and other staff to give it a road-test before a limited public trial, which could start as early as October is all goes well with the internal testing.

The screens, some of which are being installed in Civic from today, will show live information about arrival times as well as the route, destination, platform number, if the bus is equipped with a bike rack and if it is wheelchair accessible.

The system also includes a number that passengers can call or SMS – similar to a system used in Sydney – to receive up-to-date information on how the next bus is travelling.

New signs with the phone number have already been installed at bus stops in 12 suburbs and the text message system is functional now, but passengers will have to wait until the NXTBUS tracking devices are fitted in more buses before it is much use, because the system can only send out the standard timetable information for buses that do not have the trackers fitted.

For the same reason, the timetable information will be displayed on the screens during the public trial phase, alongside real-time ETAs where they are available for buses that do have the trackers installed.

The system will also provide real-time information on the ACTION website and through the phone line 13 17 10.