OVER 2000 ACT drivers were fined for using mobile phones while driving during the 2012-13 financial year, according to ACT traffic police, who have been targeting distracted drivers this month. 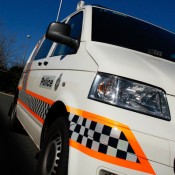 The figures show that some Canberrans are still ignoring the message not to use a mobile phone while driving, which more than doubles the risk of being in a crash, according to Officer-in-Charge of Traffic Operations Sergeant Mark Steel.

Mobile phones are the leading cause of distraction to drivers, and consequently a major cause of serious crashes.

“There is a reason why it’s called driver distraction,” says Sergeant Steele. “Talking and texting while driving takes you away from what you are supposed to be doing — paying attention on the road and driving.”

“Some drivers continue to risk their lives and the lives of others by using their mobile phone when they drive. No phone call is that important to take while you are driving.”