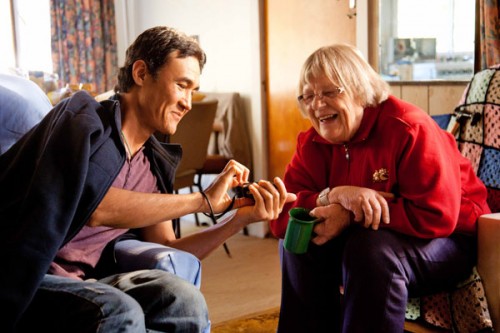 THIS feature documentary by Heather Kirkpatrick (who wrote, directed, filmed and sound-recorded) tells how a group of Tasmanian women, on learning of the impending incarceration of 100 Afghani refugee men in a new detention centre near Pontville, knitted beanies to help them cope with winter cold.

Mary, a pensioner widow in her 70s, began by discounting the inhumanity of the men’s situation even while knitting for them. The film’s principal constructs are not only the women’s work to keep the men’s heads warm but also the epiphany that turned Mary into a surrogate grandmother to Mohammad, separated from the surviving members of his family that the Taliban had not murdered.

Kirkpatrick’s observations of local farming folk converting scepticism into awareness follows comfortably as the detainees’ plight comes to light. To balance that, she invites filmgoers to read between the lines as others express vigorous resentment that detainees enjoy better comforts, benefits and conditions than little Aussie battlers. It’s clear that those attitudes come from an almost criminal basis of misinformation and false rumour.

Kirkpatrick’s film has the power to make well-meaning folk very angry about Australia’s treatment of detainees fleeing cruelty and repression in their homelands. I commend the film unreservedly to schools. I’m told she has compiled a study guide for years 9 to 12. Her web address is marymeetsmohammud.com.