THE Manhattan Transfer took some time to find their feet, and voices, on the Canberra Theatre stage.

The famed close harmonies were wider than desired and phrasing was ragged as all initially appeared uncomfortable.

Steve Haas, the outstandingly good drummer, fiddled with his earpiece and gestured off stage regularly, the bass player seemed unhappy with his speaker, Cheryl Bentyne and Janis Siegel indicated dissatisfaction with fold back levels in an unsubtle manner and confusion existed regarding some song tempos and introductions.

This was all quite unexpected and, while not alarming, it did take the gloss of sophistication from offerings of famous hits – “Jeannine”, “Route 66”, “Candy”, “Chanson d ’Amour” and “A-Tisket, A-Tasket” that, at times, sounded somewhat shrill rather than creamy smooth.

Solo performances from all four singers didn’t quite come off and it wasn’t until “Operator” that the sound began to sizzle. The tightness was suddenly there with vengeance as it was with a fantastic rendition of “Birdland”.   Then, out of the blue, The Idea of North – Canberra’s own internationally renowned harmony vocal quartet – appeared for just for one magical song, the groups combining beautifully in “A Nightingale Sang in Berkeley Square”.

Overall – a mixed performance – enjoyable, but not the spectacular show I’d been anticipating. 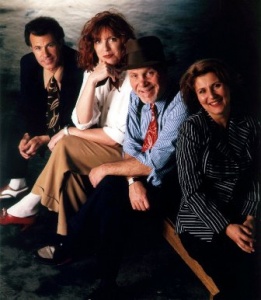 The decision to book Canberra talent as the warm-up act had become messy before the show with two of our leading vocalists, Annette Sloane and Leisa Keen, approached (unbeknown to each other) and engaged to perform.

It was upsetting for Annette when she was advised at the eleventh hour that she was no longer required. Thankfully, she is a gracious and lovely lady who decided to allow the less-than-professional process to pass without creating fuss.

Leisa, who had no knowledge of the booking mishap, was an absolute delight!  In a solo performance, rather than with her traditional trio, she charmed with her powerful voice, command of varied jazz styles, neat piano playing and stories of her student days spent with the legendary Gery Scott. From “All That Jazz” and “Perhaps” to “The Birth of the Blues” and “Georgia” this was a most enjoyable snapshot of one of Canberra’s consummate entertainers.

Torrens Primary gets a dusting of snow