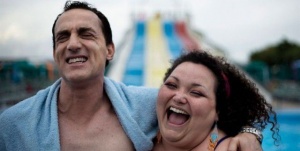 That’s the last time that segment of Neapolitan life appears. At a wedding, Luciano (Aniello Arena) to please his small girl-child fronts up to Massimo, a celebrity employed to deliver a few platitudes to newly-wed couples before sending them away to married life.

Massimo’s celebrity stems from having won a season of “Big Brother”. And Luciano is smitten by the prospect of doing just that. He and his brother Michele live in an antique apartment building among an extended family mainly comprising obese sisters and aunts, a caricature of Italian working-class folk who, when he gets an interview to enter the program, believe it’s a done deal and in time Luciano will be a rich celebrity.

The TV people tell him “we’ll let you know”, theatrical-speak for “we won’t!”. But he sees every newcomer to the square as a talent scout observing his suitability for the program.

When Luciano starts giving away household chattels to the poor to recompense a beggar whom he earlier turned away in the square where he and Michele run their open-air fish market, handsome, devoted Maria (Loredano Simioli) can no longer tolerate his paranoia. Luciano’s optimism remains unshakeable, giving the film a powerful poignancy and a justification for its outcome. That is its true reality.