INFRASTRUCTURE is the bones and the arteries of every city. Some of the bones and arteries are always more important than others, and Constitution Avenue is one of Canberra’s special cases. 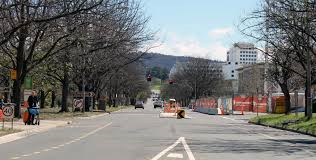 Not only is it the base of the federal triangle and a vital municipal roadway, but it is also potentially the best address in town.

Based on its study of “The Griffin Legacy”, the National Capital Authority says Constitution Avenue should be a “vibrant mixed-use grand boulevard” with broad tree-lined footpaths, outdoor dining and street parking.

A project agreement between the Commonwealth and the ACT gave the Territory $42 million as a gift to mark the Centenary of Canberra, replacing funding originally provided by the Howard Government, to upgrade “the existing road corridor and public realm space along Constitution Avenue”.

The expected completion date for the first stage from Anzac Parade to Coranderrk Street is February with a second stage to City Hill in April. Yet, no final designs have been published for Constitution Avenue and construction has not yet started under the agreement with the Commonwealth.

It is time to finalise this essential piece of infrastructure. It will be lined soon enough with wonderful, new development – apartments, professional offices, retail outlets, restaurants and hotels.

The first of these new buildings is underway on the site of St John’s and more projects have been announced on the eastern side of Anzac Parade.

Constitution Avenue promises to be a most attractive part of Canberra’s revitalised city centre. It should be of the highest quality and delivered as soon as possible.

Michael Moore - August 5, 2020
0
"Since the last election the Labor-Greens government has been using every possible tactic they could find to delay the onset of the Integrity Commission," writes political columnist MICHAEL MOORE.