AS usual the Budget papers shed some light on exactly where the ACT Government will take more money out of individual budgets from July 1 in order to shore up its own. 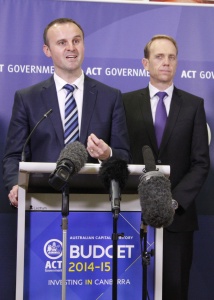 Of course indexation always drives up the actual price, in dollars, of government service fees for things like catching a bus, getting a driver’s license or registering a car, and this year is no different.

On top of that, water charges go up by 5 per cent and higher parking fees will hit this year too. When combined with more paid parking spaces, that little revenue stream will increase by 30 per cent and there’ll also be eight more parking inspectors to issue more fines to those who don’t follow the rules.

Parking fines are expected to bring in about 32 per cent more revenue than last year and the contribution from traffic fines is expected to go up by 10 per cent.

Drivers will be charged a $34 Lifetime Care and Support Levy from this year together with their compulsory third party (CTP) premium, which covers them if they are catastrophically injured in a crash and can’t prove someone else is at fault.

Rates will go up by 10 per cent on average, to offset the continuing tax reform agenda which sees more cuts to stamp duty and insurances taxes, both of which are widely considered inefficient and inequitable ways to raise revenue.

Other stamp duty rates remain unchanged except for on properties worth $1.455 million or more, which are mainly commercial and will now attract a flat 5.25 per cent stamp duty, bringing forward the lower rate that was originally slated to take effect in 2017-18.

In a special initiative for older Canberrans, people aged over 60 will now only pay $20 in stamp duty when they downsize to a smaller home.

Barr says he plans get rid of it altogether by July 1, 2016, which will make the ACT the only jurisdiction in Australia not to charge what is widely considered “Australia’s worst tax”, according to the Treasurer.

There are also cuts to payroll tax for companies, with higher thresholds meaning 39 local businesses will no longer pay any at all.