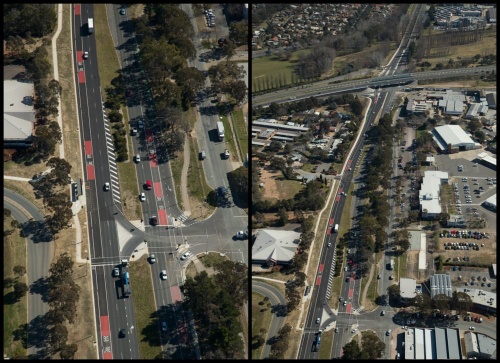 SHANE Rattenbury is celebrating the completion of the dedicated bus lane on Canberra Avenue and new park and ride facility in Fyshwick as part of a range of improvements to public transport.

“These two projects will make bus travel much more attractive for workers commuting to and from south Canberra, particularly in line with the introduction of Network 14 on September 1 which will see an increase in services and frequency,” Shane said.

“The new dedicated bus lane on Canberra Avenue will improve travel between the City and Fyshwick supporting people commuting to Canberra from Queanbeyan and beyond particularly during peak periods.

“The project has seen the construction of bus priority traffic lights at Ipswich and Geelong Streets, on-road cycle lanes between Hindmarsh Drive and Monaro Highway, a new section of shared path alongside the Canberra Avenue Service Road as well as new major bus stops on Canberra Avenue near the Canberra Eye Hospital.

“Walkers and cyclists will also benefit from enhanced lighting and additional footpaths at the new major bus stop and a new signalised pedestrian crossing on Geelong Street, which links directly to a new section of shared path constructed between Ipswich Street and Whyalla Street adjacent to Fyshwick.

“I am also pleased that the new Fyshwick park and ride facility at Tom Price Street has now opened to the public. The project includes 120 parking spaces conveniently located near Canberra Avenue which will allow easy access to the buses travelling along the rapid route.

“This is the 19th park and ride facility provided in Canberra. Each of the facilities allow people to save money while also reducing the stress of finding a car park in the city centres.”

“The completion of these two projects further demonstrates the ACT Government’s ongoing commitment to provide Canberrans with better public transport options and reduce traffic congestion on our roads.

“This is part of a range of improvements that we are making to Canberra’s public transport services, including upgrades to the bus fleet, bus stops and bus infrastructure such as new seating,” Mr Rattenbury concluded.

Belinda Strahorn - May 17, 2021
0
Long-serving chair of the Weston Creek Community Council, Tom Anderson, has resigned ending over a decade in the role.