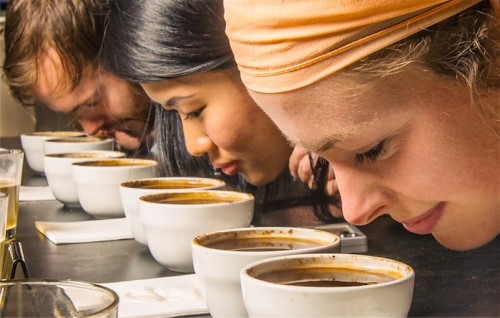 “SNIFF and slurp”, that’s snapper Gary Schafer’s fond interpretation of Cupping Room manager Jack Scheeren’s approach to encouraging the appreciation of coffee by educating customers through “cupping” – the ritualistic, international method of sampling and analysing the aroma and taste of comparative blends.

PUBLIC servant Irene Elliott is heading to India for a high-risk treatment that may mean a cure for her advanced multiple sclerosis.

Brave Irene, whose heart-wrenching story was featured on the cover of “CityNews” on October 10, will travel to the Bangalore Manipal Hospital for hematopoietic stem cell transplantation treatment, which involves harvesting stem cells from her bone marrow, then decimating the immune system with chemo before reintroducing the stem cells.

Her family raised almost $90,000 for the treatment in a “Big Fat Greek Fundraiser” at the Hellenic Club in November.

Irene says she’s now busy planning everything, including post-treatment and logistics, and expects to leave for India in early June.

“It’s exciting and I’m buzzing from the news, but it’s very scary at the same time, as this is a major treatment process,” she says.

FORMER Canberra Grammar School headmaster Tim Murray, now living in Melbourne, detected a certain irony when the school announced last week that its forthcoming production of “Julius Caesar” would take place on a boxing ring erected inside the theatre named after him.

Murray, you see, once wrote a short story called “Ring of Truth” about the pugilism at his old school, Geelong Grammar, that he helped undo as an adult drama teacher by turning the boxing ring into a stage. No wonder, he told “CityNews” it looked as if the story was coming full circle.

AS CC bumbled through the commuting classes at the bus interchange on East Row the other evening, there was besuited MLA Alistair Coe awaiting his omnibus home. It had broken down, an event the Liberal member for Ginninderra smilingly agreed would never have happened had he been in government. A regular commuter, and therefore a rare bird among his parliamentry colleagues, the Opposition transport spokesman said he was occasionally recognised and that recently someone tweeted he was on the bus, but he couldn’t spot the tweeter – half the passengers had their heads in a phone screen.

Run out of town

THE late, larger-than-life Canberra director and actor Jasan Savage would unquestionably have enjoyed his funeral last week at Norwood Park, and especially the standing ovation accorded to him by the large crowd of theatricals who turned up to bid him farewell.

Director and playwright Duncan Ley stole the show as he told how he and the late actor were once chased out of a country town by the local CWA after Savage opted for the more ribald alternative words to Henry Lawson’s “The Bastard from the Bush”.

AS Goulburn runs its beautifully executed “come and live here” campaign around Canberra, the irony of Emily Moran winning the ACT Government’s Update Your Medicare Address Campaign’s $10,000 prize draw must be galling. Emily recently moved to Canberra from Goulburn.

Meanwhile, Goulburn has come in at number eight in the top 10 regional suburbs for family living in a national “Top 100 Suburbs For Family Living” report, compiled by RP Data.

The biggest loser is Canberra, with none of our suburbs making the Top 100 because of a combination of higher prices and scarcer amenities compared with other cities. How this reconciles with last week’s news that Canberra is the most liveable city is anyone’s guess.

“THE Chronicle” of March 4 is the omnipresent Pierre the Lair’s withering focus this week. The inky weekly reports on page one of “concerns about the likelihood of a new community centre being built”.

“Or are they concerns about the likelihood of it not being built?” says Pierre.

“On page two, seasonal change in Canberra is described: ‘It’s a subtle change but quite dramatic’, which would make a dramatic change something to behold.”

WHICH discount chemist ensures the continued patronage of little old ladies by retaining their scripts? Our Weston snout’s snout has observed that the old darlings are inclined to accept when invited by this particular chemist to leave their repeat scripts with them.