IN the world of glass and printmaking, it’s common to see artists positioning themselves at the opposite ends of the spectrum—two dimensional print vs. three dimensional glass, and never the twain shall meet. 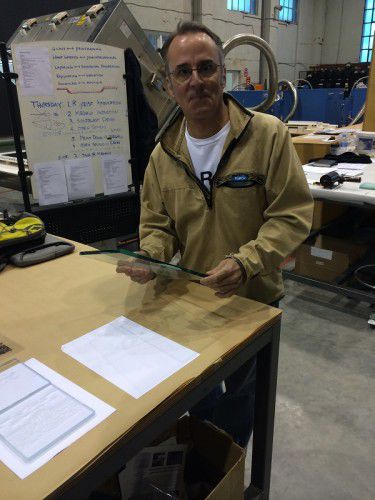 Professor Charlie Cohan from the University of Hawaii is not like that. With an almost schizophrenic attachment to both forms, he was trained in printmaking in Oakland California and Detroit, but as a native of Washington State, home to the Pilchuck Glass Centre, he is a convert to glass too.
“CityNews” popped on Cohan yesterday at the Canberra Glassworks, just before he headed for Megalo Print Studio + Gallery to do an artist’s talk.

He’s been at both neighbouring institutions this week conducting workshops on “The Glass Matrix: intersections of Cold Working and Printmaking,” with three glassmakers, one photographer and five printmakers.

Cohan cheerfully admits to split loyalties, though printmaking was certainly his first love.

Now head of printmaking at the tropically-located University of Hawaii, he is a native of Washington State in the cold north-west of the US, but he consoles himself with the though that he’s only a five hour plane trip away fromhome, and anyway, being in Hawaii has opened up to him a new world perspective. This is his first visit to Australia but he’s been 5 times to New Zealand and has done workshops in South Korea.

A great advantage of having come from the Seattle area is that he easily embedded himself in the Pilchuck, just near that city and the Mecca of world glass.Stop.
That grounding in glassk he says, has made him the multidisciplinary practitioner and lecturer he now, and made him aware of what he calls "glass opportunities."
At Pilchuck, where he curates the print collection, he has met many Canberrans, including Kirstie Rea, his collaborator on the program he's been here and Scott Chaseling, who is features in the current crossover exhibition "Glint" at the Glassworks.

And the crossover is not so much schizophrenic as a process revealing a dichotomy. Collaboration between printers and glass makers, he says, "yields some unexpected and really surprising results."

To a printer used to working in two dimensions, it opens ‘the possibilities of three-dimensionality, something more sculptural.” Glassmakers, on the other hand, being what he calls “volumnated,” have in they past looked down their collective noses at print, seen as being "in a literal tradition".

But that was in the bad old days. The glassmakers who enrolled in the workshops Cohan is running this week have been more than welcoming as they see the possibilities of glassmakers deepening the content of their work and printers moving outside the pictorial world into the sculptural world.

“I see it as a very interesting intersection,” he says of the 60-30 print and glass composition of the classes. “I think they're curious about that intersection.”
Cohan believes that glass makers are now accepting and embracing print, a phenomenon he partly puts down to individual personalities like glass makers Mel Douglas, Rea, Chaseling and Jeremy Lepisto, all of whom, and especially Lepisto, can relate to picturesque images while still fully "volumnating".

“I believe Jeremy has very printmakerly sensitivity," he says, introducing me to another word I’ve never heard before.

Some of these artists are if anything quicker to collaboration than he has been. “I’m a died-in-the-wool printmaker, but I love glass even though it's come secondarily to me, to me it becomes an extension of printing,” he says by way of explanation.

In the workshops they’ve been looking at glass, ink, and pressure in the form of engraving, sandblasting, and mono-printing techniques. Around me art artists scratching away at glass plates with their styluses. More particular has been the preparation of images for translation into photo-resist sandblasting and photo screen printing. They’ve been doing a mixture of freehand drawing and resistant printing onto glass plates.

Cohan tells me that in the bad old days when the only way you could do etching (the most traditional intersection of glass and print) on glass was by using hydrochloric acid, known in the trade as “leukaemia in a bottle.” Happily, advanced technology has assisted the process and he shows me the Rayzist film mask that allows the students to print on glass, opening up technique the potential for more imagery on glass.

After the weekend, Cohan is off to the University of South Australia for a residency and then to Brisbane to Impress Printmakers in Queensland. But with chilly Washington State-like temperatures and simpatico colleagues in Canberra, his first visit to Australia has so far, he says, been “a happy experience”.
“Glint”, at Canberra Glassworks, 11 Wentworth Avenue, Kingston, July 2-August 3.