POLICE from the Drugs and Organised Crime team and the AFP’s Special Response Group swooped on a 33-year-old man and a 27-year-old woman yesterday evening and arrested them on drugs charges. 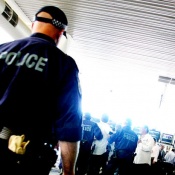 With the assistance of a police surveillance operation, the officers stopped the Forde man in Bruce at about 6.40pm last night to search him and his vehicle, finding a small bag of a crystalline powder they believed to be methylamphetamine.

Police then took the man to Forde and searched his home, where they found drug paraphernalia, including two sets of scales and smoking implements.

At the same time, the Special Response Group remained in Bruce where they searched the home of the 27-year-old woman and found another small amount of a crystalline powder suspected to be methylamphetamine, along with ecstasy tablets, steroids and suspected stolen property.

Both were arrested and charged with drug related offences, and scheduled to face ACT Magistrates Court this morning.

CityNews - August 9, 2020
0
The weekend's heavy rains has led to the closure of rural roads and unsealed roads around the territory.