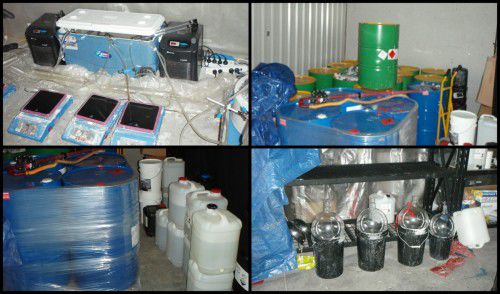 A 35-year-old Lyneham man will face the ACT Magistrates Court this morning (Wednesday, August 13) charged over the discovery in Hume yesterday of a clandestine laboratory allegedly used to manufacture illicit drugs.

About 11.30am yesterday, ACT Policing received a request from WorkSafe ACT to attend a location on Sheppard Street, Hume, due to suspicious circumstances surrounding the site.

These circumstances included odd smells detected in the area and the suspicious behaviour of a man at the site. This man was later taken into custody.

ACT Policing members attended the area yesterday afternoon and cordoned and evacuated the area, along with the ACT Fire and Rescue HAZMAT team attending as a standard safety precaution.

Police inspection of the site identified a commercial grade clandestine illicit drug laboratory within a building on Sheppard Street, Hume.

Located within the premises was a significant quantity of highly volatile precursor chemicals suspected to be used in the manufacture of methylenedioxy–N-methylamphetamine, or ecstasy.

Police maintained a static guard on the premises overnight, prior to a more detailed and through investigation of the premises today.

The Lyneham man will face court today charged under Section 611(3) of the ACT Criminal Code, Manufacturing Controlled Precursor for Manufacture of Controlled Drug.
If anyone has information about this matter which could assist the police investigation, they are urged to contact Crime Stoppers on 1800 333 000 or via the website at act.crimestoppers.com.au.

UPDATE: ACT Policing has released video from inside the lab, giving a feel for the scope of the facility.