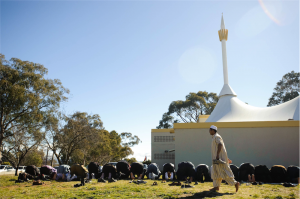 IF you look up to the sky over the weekend you should see a thin crescent moon, the observation of which is traditionally used to confirm the new month of the Islamic lunar calendar has begun, in this case the month called Ramadan.

Canberra’s Islamic community leaves the official announcement of the start of Ramadan to its local religious leaders: Imam Mohammed Swaiti from Canberra Mosque at Yarralumla; Imam Adam Konda from Canberra Islamic Centre at Monash and Imam Nouredine Lerabi, who leads the North Canberra Islamic Society in prayer at Spence Musallah.

Muslims believe it was during the same month more than 1400 years ago that the Prophet Mohammed first received messages from God, delivered to him by the archangel Gabriel as he prayed and pondered the world’s ills in a small cave on a mountain near the city of Mecca, where he lived.

In the most important of those revelations, the angel explained to The Prophet the meaning of Islam, or “submission” to God, by breaking it down into five precepts that are widely known as the Five Pillars of Islam and form the basis of living a good life for Muslims everywhere.

Fasting during Ramadan is the fourth of the Five Pillars, which begin with testifying there is one true God and Mohammed is His Messenger, and continue for the rest of a Muslim’s life with daily prayers, charity towards the less fortunate, and making the Hajj pilgrimage to Mecca at least once, if possible.

The revelations that continued for the rest of The Prophet’s life, and form the verses of the Koran, confirmed the devout religious people of the Middle East including Jews and Christians were already on the right track with pilgrimage to sacred sites, giving to the poor and fasting – a profound act of bodily purification that brings the devotee closer to God and helps them give thanks, atone for sins, and think of those who are less fortunate.

In line with these ancient beliefs, observing Ramadan means a lot more than just not eating or drinking during daylight hours. Muslims also make extra effort during the holiest month of the year to refrain from smoking, sexual activity and speaking harshly to others, and to avoid things such as  profanity, obscenity, violence, anger, envy, greed, lust and gossip. In short, they do their best for God, themselves and everyone around them.

ACT Islamic Society president Abdul Hakim says the yearly fast is not supposed to be easy, but points out there are exceptions for those who would find it impossible or difficult: prepubescent children, pregnant or breastfeeding women, travellers, older people and people with medical conditions that make fasting unsafe.

“Two things are very important about Ramadan,” he says. “During this month Muslims are very much encouraged to read the Koran and do the maximum of prayers, including special voluntary prayers, and second we are encouraged to undertake charity and humanitarian work.”

Mr Hakim says that personally, he sees fasting as very rewarding in a multicultural country like Australia, where people all around you are still eating and drinking, compared to a mostly Islamic country such as Indonesia, where non-Muslims generally avoid eating and drinking in front of people out of respect.

“I think sometimes you certainly feel hungry, sometimes you feel thirsty also, but you must have determination and once you have decided to do this, you don’t feel it so much,” he says, reflecting on his own experience over the years.

“In the last 10 days you become a little bit weak, definitely – physically it has an effect, but I think you have to put yourself in that situation and it is more often a mind game, and the other things besides eating and drinking can be more difficult to control.”

When it’s over, it’s time for the festival of breaking the fast, Eid al-Fitr, a day for everyone to come together to celebrate unity and, of course, eat lots of delicious food.
Mr Hakim welcomes everyone – not just Muslims – to come along to a big Eid celebration on the Saturday after Ramadan ends, August 2, at Australia’s second oldest mosque in Yarralumla.

The Eid Celebration on Saturday, August 2 will be Canberra Mosque, 130 Empire Circuit, Yarralumla. All welcome.

CityNews - August 12, 2020
0
Chief Minister Andrew Barr says he’s relieved that NSW Premier Gladys Berejiklian has given registered Canberrans stuck in Wodonga a four-day window to cross the Victoria/NSW border to get into the ACT.