“BOUNDLESS” breaks a Quantum Leap tradition, in that the central theme of boundlessness is explored by three separate choreographers, in a program of three related, but contrasting short works.

The result is a highly entertaining and impeccably produced evening of dance, an extraordinary showcase for the 44 participating Quantum Leap dancers, and a fascinating insight into the work of three emerging choreographers, of whom Dean Cross and James Batchelor are QL2 alma mater.

As Cross observed in his speech at the first night post-performance reception, it is rare for a choreographer to have access to so many dancers on which to mount a work. Cross took full advantage of this opportunity by augmenting his already large cast of young dancers with eight over-55 year-old dancers from the GOLD group, to create a serenely reflective and ultimately joyful work called “Samsara”.

Based on the Buddhist concept of the cycle of life, “Samsara” was performed to a luscious soundscape composed by Adam Ventoura, against atmospheric video projections by WildBear Entertainment, in which circles were a recurring theme. Circles feature prominently in the choreography, especially in the mesmerising procession which climaxed the work, featuring bodies being rolled across the stage. The work contains many poignant and amusing moments which touchingly and tastefully contrast the cycle from youth to old age. The graceful costumes designed by Kirsty Scholtz utilising subdued colour and texture are particularly noteworthy. Although conceived as an ensemble work “Samsara” also featured several short solos of which a difficult and spectacularly danced solo for Ryan Stone was a stand-out.

Using building blocks as a symbol, the first section of “Cinders” involves a series of highly complex machine-like unison manoeuvres performed in Victoria Worley’s one-piece boiler-suit style costumes. As these costumes are peeled away for the second section, the movement becomes broader and less restricted as the dancers explore and embrace their individuality. Morgan Hickinbotham’s electronic soundscape and WildBears’ highly imaginative video background perfectly complement Batchelor’s powerful work, performed with great commitment and skill by the eight dancers.

Helpmann Award nominated, Perth-based choreographer, Danielle Micich, themed her work, “The Bigger Picture”, around the perceptions of her 28 young dancers as to the kind of world they live in.

The work commences strikingly with all the dancers on stage while their 28 individual video portraits are projected on a huge screen behind them. As the video vision, devised by Ashley de Prazer, changes constantly behind them, the dancers perform a series of amusing and striking vignettes inspired by the images.

Clever use of large group movement, combined with simple, colourful costumes by Kirsty Scholtz and an arrestingsoundscape by Adam Ventoura, provided an engaging and entertaining opening work. 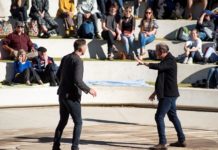 Ian Meikle - August 3, 2020
0
This week we're grateful for grants, politicians, hairdressers and a giraffe's birthday... it's another "Seven Days" with IAN MEIKLE.