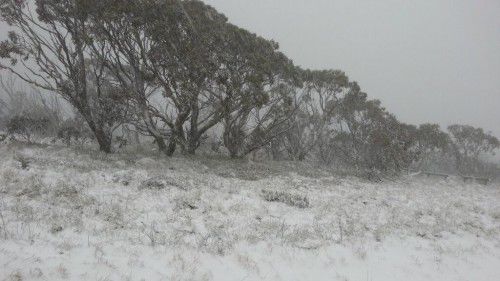 The first of the Government closures due to the inclement weather are in with the sports grounds shutting up shop, this page will be updated through the day.

“All ACT Government sportsgrounds will be closed today Tuesday 24 June due to wet weather and the forecast of further showers,” said a spokesperson for the Economic Development Directorate.

“The decision has been taken in order to minimise damage to the turf surfaces and in the interests of player safety.

“The focus is on protecting grounds from unnecessary wear and tear during training and in allowing weekend competition to go ahead wherever possible.

“The rainfall yesterday averaged around 10mm and with a further forecast of rain for today, and with very cold temperatures and low evaporation rates, grounds will be slow to dry out.”

TAMS have tweeted some road closures and a great shot of snow in Namadgi.

The ACT Government is advising motorists and other road users to exercise caution on rural roads in light of recent wet weather and snow.

A number of roads have already been closed due to poor weather conditions including:

The ACT Government will provide updates on any further road closures.

Residents wanting to experience the snow first-hand are strongly encouraged to consider visiting an established snow recreation area, such as Corin Forest, rather than informal areas.

Motorists are urged to drive with care on our local roads and adjust their driving to the weather and road conditions.

The Tidbinbilla Nature Reserve is now closed due to high winds. The Tidbinbilla Visitor Centre will remain open, but the rest of the reserve will be closed until further notice.

Corin Road is now closed at Woods Reserve to all traffic excluding four-wheel-drives, and Sunshine Road is closed due to flooding.

Angle Crossing Road is now closed due to flooding.

A number of roads have already been closed due to poor weather conditions including:

The ESA has had 14 calls for help.

The ACT State Emergency Service (ACTSES) has received a total of 14 calls for help since 4pm yesterday due to the wet and windy weather.

Most calls for help have been from Canberra’s northern suburbs.

The Bureau of Meteorology has reissued the Severe Weather Warning for damaging winds across the ACT.

Residents who require storm or flood assistance can call the ACTSES on 132 500.

Corin Road will be closed from 4pm.