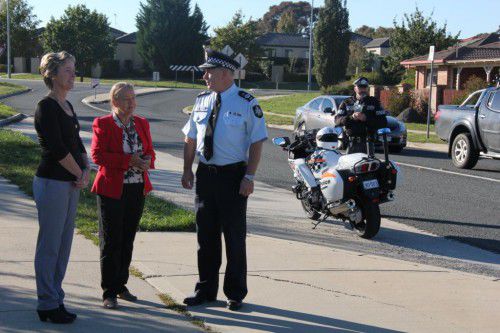 “As children return to school from a two-week break, we’re reminding motorists to take care around school zones and adhere to the 40km/h limit between 8am and 4pm,” Joy said.

“More than 71,000 students return to school this week, and it’s important for motorists to remember children are our most vulnerable road users; they are not as aware as adults of the dangers associated with crossing the road.”

“Whether they’re walking, riding, catching a bus or being dropped off at school, children use Canberra’s roads to get to school and it’s up to us to make sure they’re safe. Children are less aware of road safety and behave unpredictably around traffic. With that in mind, drivers should be extra cautious around school zones.”

Last term, police targeted every school zone and 222 drivers received Traffic Infringement Notices (TINs) for speeding in ACT school zones and 194 drivers received official cautions. This represents an increase from the 197 TINs and 116 Cautions issued between February and April 2014.

“We’re hoping to see fewer people caught speeding in school zones this term. Motorists have been warned, police will be out targeting speeding in every school zone this term and the 40km/h speed signs are on display – there is no excuse for speeding around schools.”

CPO Lammers said ACT Policing would conduct traffic patrols at each school at least once during Term 2, targeting speeding along with other offences such as failing to give way at a school crossing.

“Speed limits in school zones are there to ensure the safety of our children by allowing motorists extra time to stop in an unexpected situation. Police will continue to enforce the 40km/h limit by proactively targeting each school throughout the term,” Rudi said.

CityNews - October 30, 2020
0
More than a week after Canberra recorded its first active coronavirus case in months, it has returned to being covid-free.