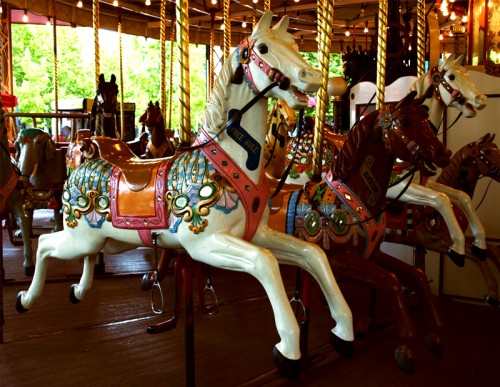 I WAS never much of a carousel aficionado, until I moved to Canberra.

But after falling in love with the Melbourne Cup winners on our own merry-go-round, I’ve paid much more attention to those in other cities when I travel.

The modern merry-go-round emerged from early jousting traditions in Europe and the Middle East, during which knights would gallop in a circle while tossing balls from one to another.

By the 17th century, the balls had been discarded in favour of rings which the riders were encouraged to spear while spinning. Carousels soon sprung up at fairgrounds across Europe to give children a chance to emulate their crusading heroes.

An early carousel of wooden horses was built at the Place du Carrousel in Paris, and my favourite carousels can all be found in the City of Lights.

The triumph of the Parisian carousel is found not just in its charm, but also in its clever placement.

While there are more than 20 roundabouts scattered all over the city, the best are found in the middle of public parks and gardens. Most parks in Paris have one, and children can choose from the dodos and dinosaurs at the Jardin des Plantes or the elephants and unicorns at the Jardin du Luxembourg.

So, what would happen if our own beloved, but tired old merry-go-round was to move to a new, leafier location?

I think Glebe Park, a long-forgotten corner of our city centre, is the perfect place for a restored carousel to delight a new generation of Canberra children.

When the Allawah, Bega and Currong flats are demolished and new apartments in Reid are complete, Glebe Park will become the backyard for many new families. As the city reorients itself, we are presented with new possibilities. Glebe Park could give our carousel a new lease on life and help create a new children’s hub in a space of the city that is underutilised.

The merry-go-round could be the impetus to make Glebe Park a magical children’s destination. All we need is a little imagination.